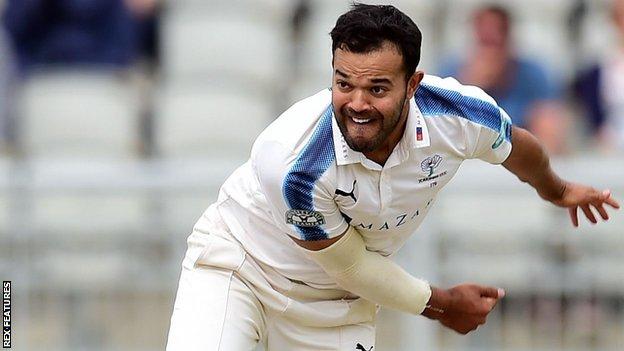 London: Professional Cricketers’ Association chief executive Rob Lynch told British lawmakers on Tuesday that the organisation had made mistakes in how it dealt with Azeem Rafiq’s allegations of racism against Yorkshire.

The Pakistan-born former player delivered harrowing testimony to MPs in November in which he said his career had been ended by the abuse he received at the county club. A video grab from footage broadcast by the UK Parliament’s Parliamentary Recording Unit shows former Yorkshire cricketer Azeem Rafiq testifying in front of a Digital, Culture, Media and Sport Committee in London on 16 November as MPs probe racial harassment at the club. AFP

Rafiq described the PCA, which operates as the players’ union, as “incredibly inept” during his evidence to the parliamentary Digital, Culture, Media and Sport select committee.

Lynch told the same committee on Tuesday there had been “some failings in our dealings with Azeem Rafiq”.

“PCA have offered support to Azeem throughout his career but clearly with this dispute with Yorkshire we did not meet the standards we needed to and have apologised to him for what went wrong,” he said.

Lynch was asked what he learned from Rafiq’s testimony three months ago.

“I specifically learned we needed to voice pressure more publicly and more quickly, which in this incidence was with Yorkshire and the ECB (England and Wales Cricket Board), so if we were in a similar issue again, we would do that,” the PCA chief executive said.

PCA non-executive chairman Julian Metherell revealed that Rafiq would be involved in an education programme being rolled out by the union.

The organisation is set to bring in its own independent whistleblower hotline and will also recruit a director of equality, inclusion and diversity.

India vs New Zealand: With focus on adapting to conditions and game time for core players, visitors begin series with one-off T20I
IPL Auction 2022: Suresh Raina, Chris Lynn and other top names that could go unsold