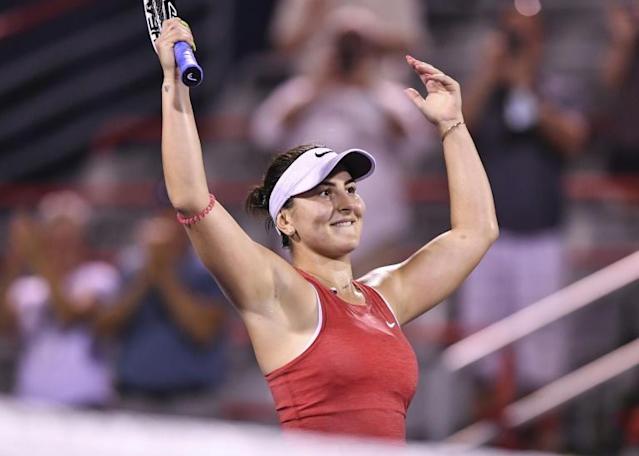 Montreal: Defending champion Bianca Andreescu overcame a surprise showing from Harriet Dart, recovering to post a 6-1, 3-6, 6-3 victory to reach the third round of her home WTA tournament on Tuesday.

The 2019 US Open champion, who missed the entire 2020 season with injury, has played little in 2021 and hadn’t won a match since reaching the second round at Eastbourne in June.

Here she enjoyed a first-round bye before taking more than two hours to get past 172nd-ranked Briton Dart and take a step toward retaining the title she won in 2019 when Serena Williams retired after just four games of their final.

Kvitova won the Canadian title in 2012, but hasn’t made it past the third round since.

In first-round action, Olympic absentee Coco Gauff played her first match since Wimbledon and came away with a 6-1, 6-4 victory over Anastasija Sevastova.

The US teenager had to abort her planned trip to Tokyo when she tested positive for COVID-19 on the eve of her departure for Japan.

“The timing of it was terrible, but the actual experience wasn’t too bad,” Gauff said. “I didn’t have symptoms other than loss of smell. My dad and my brother had it at the same time as me so I didn’t have to quarantine alone. They also didn’t have many symptoms.”

The 17-year-old eighth seed shrugged off the bitter career disappointment once on court in Canada with victory in 67 minutes.

The win was a first for Gauff in the series after losing her first three against Latvia’s Sevastova.

“I can’t sit here and lie and say I didn’t think about it,” Gauff said of her losing record against Sevastova. “I for sure thought about it.

“Our last couple matches we split sets almost every time. I just focused more on this match and didn’t worry about previous ones.”

Gauff came back in the second set from an early break down and advanced on her second match point.

Stephens was badly outpaced by Yastremska’s 27 winners to her own seven but managed to grind out a win in nearly two hours.

She sprinted to the finish, winning 15 of the last 19 points to book a clash with top-seeded Aryna Sabalenka.

British No. 1 Johanna Konta, another who missed Tokyo due to Covid, reached the second round in her first match since mid-June as China’s Zhang Shuai retired with a leg injury.