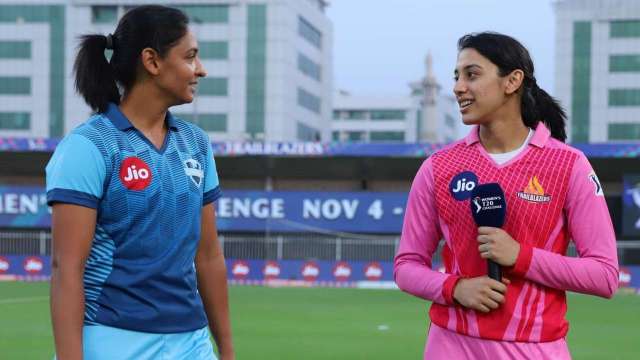 The Women’s T20 Challenge 2022 will get underway at the MCA Stadium in Pune on 23 May, some 18+ months after the last edition was held in 2020. Though there was no official word from the Indian cricket board, reports claimed last edition in 2021 wasn’t held due to COVID-19.

The Indian Premier League in 2021 also became a victim of the pandemic when it had to be suspended in early May due to the bio-bubble breach by the deadly virus but was resumed and finished in September-October in the UAE.

We are not drawing any correlation here, only trying to show how BCCI operates differently in different aspects of its functioning. In that regard, it’s great news that the Women’s T20 Challenge is making a return. What’s even more exciting is the 2022 edition of the exhibition T20 tournament could finally be the eventual stepping stone for the Women’s IPL which it was always expected to be. The captains with the Women’s T20 Challenge 2022 trophy. BCCI

“The T20 Challenge was always going to be a stepping stone for the Women’s IPL. So definitely, whenever it starts, this (T20 Challenge) is a pretty important tournament in that regard,” India’s star batter and Trailblazers captain Smriti Mandhana said on the eve of the T20 Challenge.

BCCI president Sourav Ganguly had announced in March this year that the board is working on starting the Women’s IPL in 2023.

“Maybe this will be the last edition (of the T20 Challenge) and next year we’re looking positively at the IPL (beginning) and that will give more opportunities for the girls to perform,” Supernovas captain Harmanpreet Kaur said in her virtual press conference ahead of the Women’s T20 Challenge 2022.

The Women’s T20 Challenge began in 2018 as a one-off game and was later expanded to a three-team affair for 2019 and 2020. There have been many positives from the four-fixture affair and a classic example has been of Shafali Verma who lit up the T20 World Cup 2020 in Australia after playing for Velocity in the 2019 edition.

One only wonders, how much more the BCCI and Indian cricket could have gained by launching the Women’s IPL in past or by expanding the T20 Challenge. That feeling of bewilderment or criticism of the cricket board is nothing new. England already have The Hundred. Australia have the Women’s Big Bash League. And very recently a privately-funded but ICC sanctioned T20 tournament — FairBreak Invitational — was held in Dubai.

The consolation though is that the Indian board is closest it has come to launch the Women’s IPL or so it seems. But before it begins, it will be the Women’s T20 Challenge that will once again become the ground for the Indian players, especially the unheralded and the uncapped ones and the ones on the fringe, to showcase their talent ahead of the 2022 Commonwealth Games and the T20 World Cup that is slated for early next year, given that they get some opportunities in the four-game tournament.

Mithali Raj and Jhulan Goswami both will not be part of the Women’s T20 Challenge. They also did not play in the recent Senor Women’s T20 Trophy and that should make for extra places. Senior pacer Shikha Pandey is also missing from the squads. She wasn’t part of the 2022 ODI World Cup also. As many as 13 uncapped players are featuring in the squads but it’s highly unlikely that all of them will get a hit in the middle. After doing well in the domestic T20 competition, KP Navgire, who smashed 525 runs in just seven matches in the Senior Women’s T20 Trophy, and Maharashtra spinner Aarti Kedar who scalped 13 wickets, are expected to attract attention.

“…this is the Indian Women’s T20 Challenge and we would want our uncapped players to go out there and play something which is very close to international cricket. But two or three matches is a really small number of matches to give opportunities to everyone,” Mandhana said in the tournament press conference.

And only because we are talking about the tournament, it is important to point out that the scheduling could have been a lot better. Supernovas play a game on 23 May evening and will be required to turn up to the ground again for a game on 24 May afternoon. Probably nobody gave the news to BCCI that India is facing one of its worst heatwaves.

Last but not the least, the Women’s T20 Challenge will be broadcast on TV and will be streamed online as well. A welcome change after the Senior Women’s T20 Trophy, which had heavyweights like Mandhana and Harmanpreet playing it, couldn’t make its way to your living rooms because of the lack of telecast.

The Women’s T20 Challenge has been an imperfect tournament in many ways and yet it has given a lot of hope to the women cricketers in India, which goes to show there’s a long way to go before we think of parity and equality between the men’s and women’s game. Despite its imperfection, when the Women’s T20 Challenge gets underway on Monday, there will be pure excitement and hope that Women’s IPL is not far anymore.