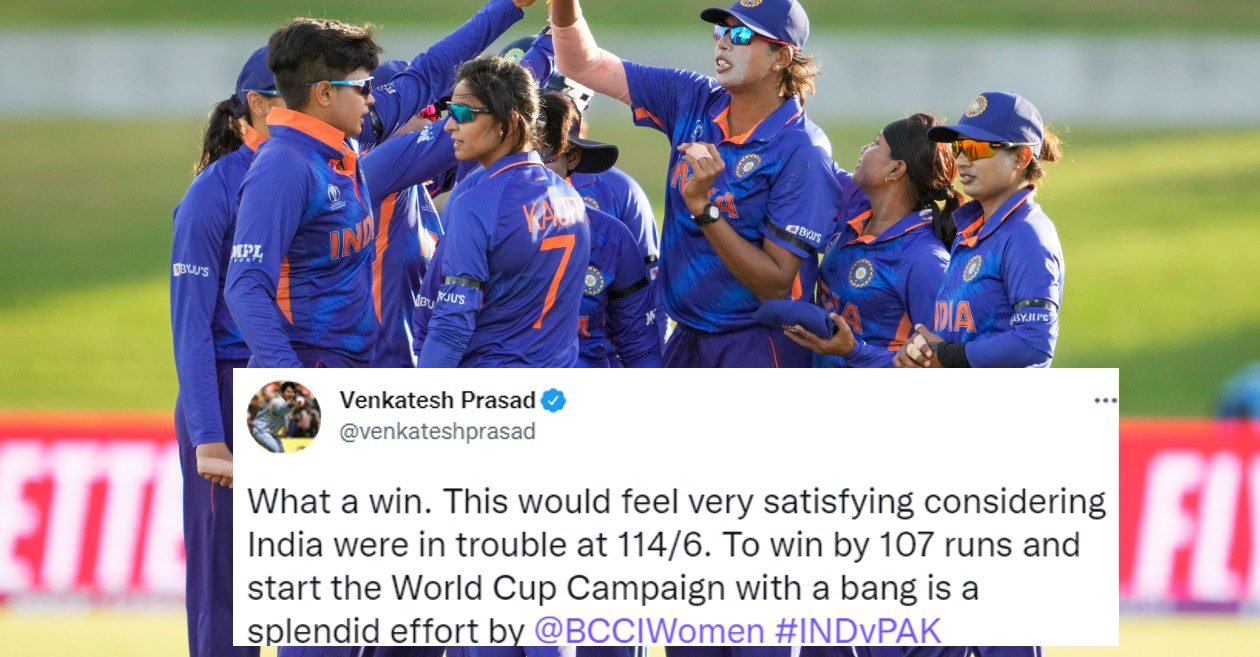 India defeated Pakistan by 107 runs in their opening match of the Women’s Cricket World Cup at Mount Maunganui on Sunday.

The first clash between arch rivals since India’s victory in the 2017 World Cup ended with Pakistan all out in the 43rd over for 137 in reply to India’s 244 for seven.

Pakistan had the upper hand when they had India six for 114 in the 34th over.

However, a 122-run seventh-wicket stand between Pooja Vastrakar and Sneh Rana rescued the innings to get the score up to 244 for seven.

Vastrakar, the player of the match, belted 67 off 59 deliveries before she was bowled by Fatima Sana at the start of the final over while Rana was unbeaten on 53 off 48.

Sidra Ameen was the top scorer of Pakistan with 30 runs while Diana Baig hit 24 runs. Rajeshwari Gayakwad picked a 4-wicket haul for India.

The cricket fraternity and the fans lauded the Indian team for its gutsy performance. Here’s a look at some of the tweets:

The partnership between Sneh & Pooja got us back in the game when we were 114/6. The best thing the two did was to rotate strike smartly & convert 2s into 3s & didn’t miss out on putting loose deliveries away.

What a spectacular performance by the Indian girls against Pakistan.
That was a thrashing, and in grand style.
Pooja Vastrakar with a valiant innings, the ever so reliable Sneh Rana’s great all-round show & Rajeshwari Gayakwad outstanding with the ball.
ChakDe India #IndvPak pic.twitter.com/CyAy04phTt

Many congratulations to the Indian women’s team on an outstanding win against Pakistan today. What a great start to the #CWC22. Way to go girls!! #INDvPAK pic.twitter.com/y9VevRlkD2

Congratulations to our @BCCIWomen team for a super start in the World Cup.A fifty in crisis situation was rewarded in Player of the Match award for @Vastrakarp25 but everyone contributed in#TeamIndia #CWC22 #INDvPAK win. pic.twitter.com/Mnf1gXFi0w

What a start for our women’team in #ICCWorldCup ! Big win and great beginning in #indvspak game in New Zealand at the World Cup.#INDvPAK pic.twitter.com/dTKT93cs7F

An amazing start to the Women’s world cup campaign by @BCCIWomen team by defeating the arch rivals with a wide margin! Looking forward to Indian women’s team shine at the world stage! #CWC22 #WorldCup2022

Excellent start to the World Cup. Always good when so many players contribute. Love the balance that Deepti Sharma, Sneh Rana and Pooja Vastrakar provide.

India have won 11 out of 11 Women’s ODIs against Pakistan.#INDvPAK

Many congratulations @BCCIWomen on a comprehensive win against Pakistan and starting the World Cup on a spectacular note. Well played. Wishing the girls the very best for the matches ahead. #IndvPak pic.twitter.com/y61tmzIODL

India keep their 100 percent winning record against Pakistan in ODIs. They have played 11 and won 11.

One player has featured in all 11 games – that is the captain Mithali Raj. #CWC22