With ICC events in sight, India need to reinvent their batting approach to finally crack the code 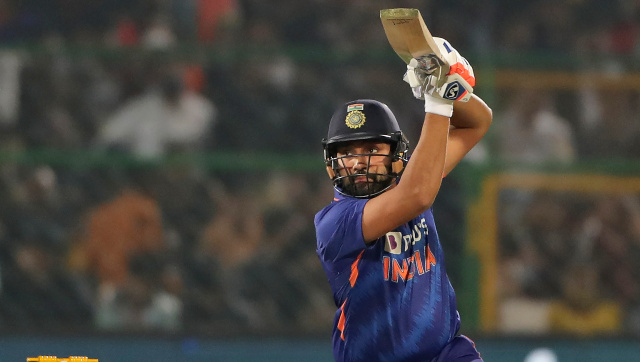 Batting has been India’s mainstay in the white-ball formats but the same strength has come unstuck recently, leading to massive defeats and unexpected results.

The Men in Blue entered the 2021 T20 World Cup as one of the favourites, but in the crucial first two matches — against Pakistan and New Zealand — they could only score 151/7 and 110/7 batting first. As a result, the then Virat Kohli-led side exited the tournament at the Super 12 stage.

In South Africa, they had to suffer the double blow of Test and ODI series loss. While the batting issues in Tests can be solved by personnel change, the problems in white-ball formats are multifold. India must end their reliance on the top three batters to become a more efficient batting team in white-ball formats. AFP

In the three ODIs that India lost on their way to being clean swept, they failed to chase down sub-300 target on two occasions. In the second ODI, they could only post 287/6 batting first. The run-scoring wasn’t enough in either of the matches as India came undone in the series. This despite the line-up boasting big and reputed names like Kohli, Shikhar Dhawan, KL Rahul, Rishabh Pant and Shreyas Iyer.

The rot lies in India’s approach towards batting in the white-ball formats. The long revered safety-first and attack later approach has served India well if we look at the stats. India have been one of the best ODI/T20I sides over the last five years, but the same approach has led to India’s downfall in the biggest of events.

The methodology to conserve wickets at the start, build partnerships, and attack in the death overs has its advantages but it also led to a lack of plan B which has had India looking desperate in the middle.

The prolonged dependency on the top three of Rohit Sharma, Dhawan and Kohli has in many ways never allowed India to have a settled and solid middle order. The musical chair that selectors and team management organise at regular intervals has only worsened the matter. In the 2017 Champions Trophy final and the 2019 ODI World Cup semi-final, once the top three failed, India never managed to recover to save the day, they just didn’t have enough wherewithal.

Similarly, the reluctance in going hard from the get-go also leaves India with very little on the board if the run accumulators perish unexpectedly and fail to bat deep, as was the case in South Africa.

Kohli, Dhawan, Rahul, all scored half-centuries in the ODIs, but none of them went on to bat deep. Once they went back to the hut, the middle order lacked firepower and substance.

There’s a clear need here for India to revamp their batting approach in the white-ball format going forward as they are destined to play two ICC events in the upcoming two years.

Bat as a whole

A philosophical change is required more than anything in the Indian setup. It’s time the batting responsibilities are spread across the lineup instead of relying on the top three. The top three need to become part of a whole rather than being the whole.

Such an approach would allow Indian batting to better prepare for collapses that have hindered their progress in the recent ICC events. A similar strategy has been followed by the best of the teams, namely England. Their batting doesn’t depend on a couple of players, not one batter is more important than others. They bat as a whole and pose a manifold challenge to the opposition. There’s never a respite to the bowling team even if they get rid of one or two batters.

In Inda’s case, the responsibility to steer the innings and post challenging totals has largely been thrust upon the top three. When it clicks, it blows away everything in its wake, but when it fails, it exposes the undercooked middle and lower order, leading to defeats at critical stages.

Sharing responsibilities will also allow more batters to develop their game and earn the experience of steering the team across the finish line.

At the same time, there’s a need for India to be more proactive with their scoring rate from the start. The strategy to go big only towards the fag end of the innings is fraught with risk. There are no guarantee runs will come in the death overs.

The best way forward would be to pick up quick runs from the start rather than relying on what can be done. It’s a strategy that has paid rich dividends to teams like England and Australia.

Rishabh Pant was India’s No 4 in the South Africa series. The No 4 spot has continued to be India’s bane in ODIs for quite a while now. While the flamboyant left-hander has all the traits to fit the part, it’s important to assess whether that is the best decision for the team.

Shreyas Iyer who was demoted to No 5 in the Proteas series occupied the No 4 spot for 12 consecutive innings before the contest. His returns at No 5 in the series read 17, 11 and 26 — a far cry from his potential. While Pant could be a successful No 4 or 5 batter, Iyer doesn’t appear as an ideal No 5 player.

With Rohit returning, Rahul won’t be required to open anymore and could drop to No 5 where he has an average of 56.62 and strike rate of 133.81 after 453 runs in 10 matches. But that would mean Iyer will have to warm the bench. Selectors could have been brave and rested Kohli in order to allow India to experiment more in the West Indies series with an eye on the future.

Rahul could also take the No 6 spot to play the finisher’s role. He has only batted once in that spot, or India could decide to go with Suryakumar Yadav who played in the third ODI against South Africa after the twin failure of Venkatesh Iyer in the same spot.

Another area of possible experimentation could be the opening slots. Ruturaj Gaikwad is part of the ODI squad while Ishan Kishan features in the T20I squad. They could be asked to replace Dhawan, because captain Rohit is indispensable, in order to help India up the ante from the start. Or Rohit and Dhawan could be asked to play a different game than their natural style.

Different combinations are possible and it will be interesting what Rohit and coach Rahul Dravid opt for in the upcoming series, but given that an inexperienced South African was easily able to upset India who were operating on their long-trusted batting template signals that time for change has come.