Wimbledon: Sania Mirza, Rohan Bopanna Bow Out In Mixed Doubles Round Of 16 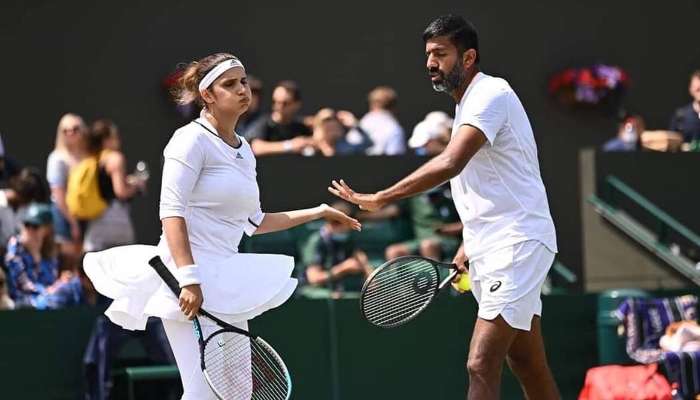 Rohan Bopanna stayed solid with his service games and net play but Sania Mirza’s serve was consistently put under pressure as the Indian team was ousted from the Wimbledon Championships following a three-set defeat in the stop-start mixed doubles third round on Wednesday. The contest resumed with the 14th seed pair of Jean Julien-Roger and Andreja Klepac having a one-set lead and they finished on the right side of the result with a 6-3 3-6 11-9 scoreline. Mirza has not played much competitive tennis post her comeback and is struggling to get her serve right. Serving to stay in the match at 5-6 in the decider, Mirza managed to hold after a few anxious moments.

It was largely Bopanna’s reflexes at the net and a solid game from the baseline apart from a superb lob from Mirza that helped the Indians pull off the game after two deuce.

Mirza again served in a similar situation at 9-10. Roger hit a crushing forehand winner at 15-15 and then Bopanna’s volley sailed over the baseline.

The Dutch player, on the second match point, then executed a stunning service winner, that whizzed past from Bopanna’s right side.

It was Mirza’s last tournament before the Tokyo Games where she will compete in the women’s doubles with Ankita Raina. With this defeat India’s challenge has ended at the grass court Grand Slam.