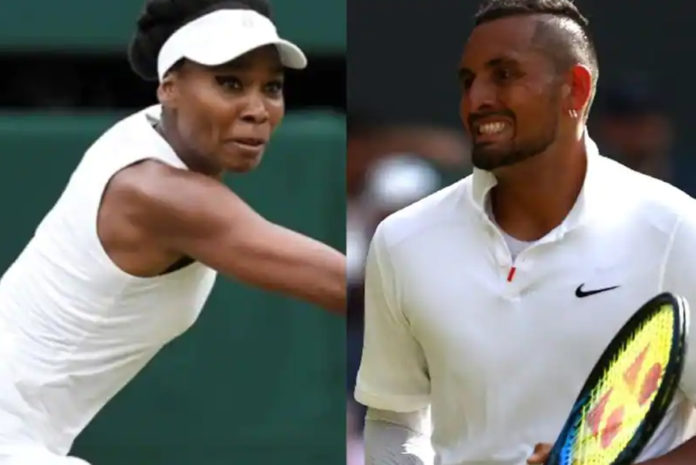 If the Venus-Kyrgios pair clicks at Wimbledon this year, it will be after a gap of 23 years that the American will lift the mixed doubles trophy after she won the last of her two Grand Slam titles in the event at the French Open in 1998.

previous best in mixed doubles at Wimbledon has been a runners-up finish in 2006.

The 26-year-old Kyrgios, on the other hand, has one of the biggest serves on the ATP Tour and the farthest he has gone at Wimbledon is securing a last-eight berth in 2014.

Four years ago, when asked who her dream mixed doubles partner would be, Venus had said, “I don’t know, I think it’d be fun to play with Nick Kyrgios.”

Wimbledon 2021 – Venus, Kyrgios Mixed Doubles: Kyrgios announced in his pre-tournament press conference on Saturday that he will compete in the mixed doubles event here Wimbledon with the former world No.1.

“The mixed doubles pair of the tournament,” Kyrgios said after making the announcement.

n 1998, Venus won the Australian Open and French Open mixed doubles titles, both with partner Justin Gimelstob. Her only other trip to a mixed doubles Grand Slam final came at Wimbledon 15 years ago, where she and Bob Bryan fell to Vera Zvonareva and Andy Ram in straight sets.

Wimbledon 2021 – Venus, Kyrgios Mixed Doubles: Kyrgios most recently competed in mixed doubles with American Amanda Anisimova at last year’s Australian Open and before that with Desirae Krawczyk (US) at Wimbledon in 2019.

Serena Williams Not To Take Part In Tokyo Olympics
Wimbledon: Stefanos Tsitsipas Falls To Frances Tiafoe In First Round