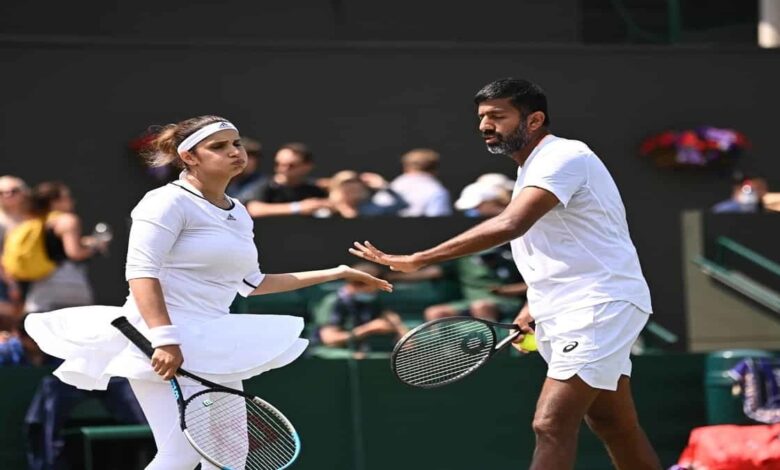 Star India player Sania Mirza and her mixed doubles partner Rohan Bopanna defeated compatriots Ankita Raina and Ramkumar Ramanathan in the first round of the ongoing Wimbledon Championships on Friday. Sania and Bopanna beat Ankita and Ramanathan in two straight sets 6-2, 7-6. The first set was rather easy for the experienced duo as they clinched the game with a considerable margin. However, Ankita and Ramanathan gave their all in the second set, and Sania and Bopanna had to fight hard to come out with flying colors.

The all-Indian contest lasted for one hour and nine minutes as Sania and her partner won 69 points, 11 more than their opponents.

On Thursday, Sania Mirza and her doubles partner Bethanie Mattek-Sands sailed into the second round of the ongoing Wimbledon Championships.

Sania and her American partner easily defeated the doubles pair of Desirae Krawczyk and Alexa Guarachi in the first round of women’s doubles. Krawczyk and Guarachi gave a tough fight to Sania and Mattek-Sands in the first set however, the Indian tennis star along with her partner clinched the opening set 7-5.

Riding on the winning momentum, Sania and Mattek-Sands thrashed sixth seed pair of Krawczyk- Guarachi in the second set with a 6-3 win to kick off the quest of Grand Slam in style.

Meanwhile, Sania and Ankita are all set to represent India in Women’s Doubles at the upcoming Tokyo Olympics after entries were officially announced on Thursday.

Sania will now become the first female athlete to represent India at four Olympics when she features at the Tokyo 2020, slated to get underway from July 23 while Ankita Raina will be making her debut at the showpiece event.