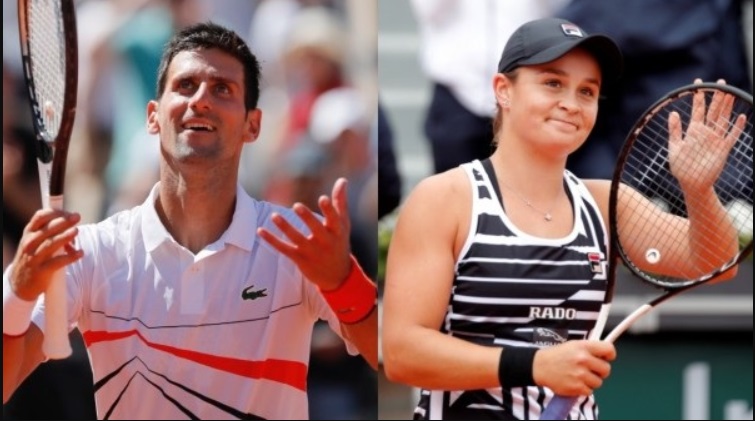 Wimbledon 2021: Novak Djokovic, Ash Barty among top seeds announced for Wimbledon; check full list- The Wimbledon 2021 seedings for men’s and women’s singles main draw has been released with World No.1 Ash Barty and Novak Djokovic leading the chart. Djokovic will start The Championships as defending champion after beating Roger Federer in 2019 final. The Serb will aim for a sixth trophy at the All England Club and if he achieves that will draw level with Federer and Rafael Nadal on 20 Grand Slam singles titles overall.

Barty, who won her first major at Roland-Garros in 2019, hopes to improve on her career-best fourth round effort at Wimbledon from two summers ago. The 25-year-old retired with a left thigh injury during her second round match at Roland-Garros recently.

Russian Daniil Medvedev will feature at the opposite end of the draw from Djokovic as No.2 seed, recent Roland-Garros runner-up Stefanos Tsitsipas will be the No.3 seed with Dominic Thiem next on the list. The Austrian, who won last year’s US Open, will be hoping a wrist injury that forced him to withdraw from his match at an ATP event in Mallorca on Tuesday heals quickly.

Eight-time men’s singles champion Federer will start his bid for more success as the No.7 seed. He will find out during Friday’s draw which higher-ranked players might be waiting in his path.

One possibility for the Swiss is a quarter-final meeting with Djokovic, who is halfway to winning all four Grand Slam singles titles in the same year after trophies in Melbourne and Paris so far this season. The 34-year-old has the chance to become the first man since Rod Laver in 1969 to claim the so-called ‘calendar slam’.

In-form seeded players in the men’s draw will also include last Sunday’s Queen’s winner Matteo Berrettini from Italy, and the Halle champion from last weekend, Frenchman Ugo Humbert. Both have reached the fourth round at The Championships in the past.

Italy has four men in today’s list, including teenager Jannik Sinner who will make his Wimbledon main draw debut as the No.20 seed.

Barty’s main rivals for the ladies’ title on paper include No.2 seed and defending champion Simona Halep, who lost just four games against Serena Williams in the 2019 final. The 29-year-old Romanian hasn’t played competitively since Rome after picking up a calf injury that week.

Belarusian Aryna Sabalenka and Ukraine’s Elina Svitolina are seeded No.3 and No.4. The seven-time champion Williams will start as the No.7 seed and will again try to collect a record-equalling 24th major singles title. The 39-year-old American last won a Grand Slam singles trophy in Australia in 2017.

Poland’s surprise 2020 Roland-Garros champion – and a former Junior Wimbledon winner – Iga Swiatek will look for a first main draw victory in SW19 as the No.8 seed.

Former two-time Wimbledon winner Petra Kvitova will start inside the top 16 seeds at No.11, as will the 2017 ladies’ champion Garbiñe Muguruza from Spain, who is seeded No.12.

This year’s Roland-Garros singles and doubles champion, the Czech Republic’s Barbora Krejcikova, will be seeded No.15.

Another two names to follow from next Monday will be American Cori Gauff and last week’s Birmingham champion Ons Jabeur from Tunisia. Gauff provided one of the big stories of the 2019 Championships when she beat Venus Williams as a 15-year-old qualifier en route to the fourth round. They will start the tournament as the No.21 and No.22 seeds respectively.

For the first time since 1978, Great Britain has three singles players seeded. Dan Evans takes the No.23 spot in the men’s draw and Cameron Norrie earns his first seeded place at a major at No.30 after reaching the Queen’s final last Sunday. Former Wimbledon semi-finalist Johanna Konta will be seeded No.28 in the ladies’ draw.