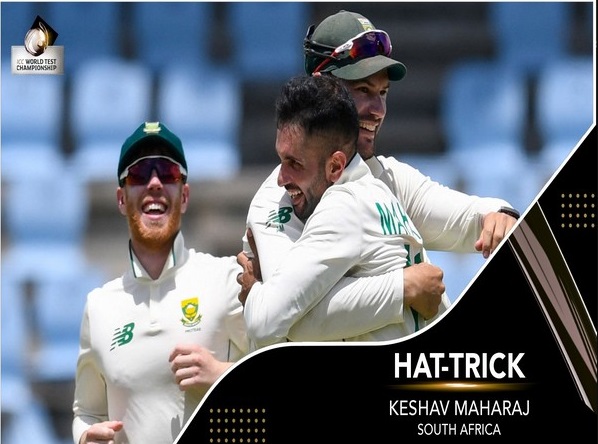 Maharaj achieved the feat in the ongoing second Test against West Indies. The 31-year-old spinner first dismissed Kieran Powell and then picked the wickets of Jason Holder and Joshua Da Silva to put South Africa insight of a 2-0 series win. Three wickets for Kagiso Rabada and a hat-trick from Maharaj in the first session saw West Indies losing six batsmen for less than 100 runs on Monday. South Africa reduced West Indies to 109/6 at lunch on day four after sensational bowling performances by Rabada and Maharaj.West Indies still need more than 150 runs to win the second Test.

On Sunday, a remarkable 70-run, eighth-wicket stand between Rassie van der Dussen and Rabada put South Africa in the driving seat on Day Three of the second and final Test against West Indies.

Van der Dussen returned unbeaten for 75 off 142 balls – his sixth Test half-century – after the batting unit collapsed after lunch was taken early. Rabada’s 40 off 48 was a career-best score for the 26-year-old number nine batsman.

The day began with the loss of the entire first session due to a wet outfield caused by overnight and morning rain with the visitors due to come in to bat.

They lost the top and middle orders in quick succession, languishing on 54/6 after 20 overs when Keshav Maharaj jumped into the frying pan with Van der Dussen. They squeezed 19 runs from 38 balls for the seventh wicket before Maharaj fell victim to Jayden Seales for six.

Rabada, batting at a strike rate of 83.33 alleviated the pressure from Van der Dussen and did well to see off the worst of the West Indian attack.

Together, they moved South Africa to a more satisfactory 174 all out, setting the hosts a daunting target of 324 to win – they have yet to reach the 200 run mark in this series.

Kemar Roach (4/52) and Kyle Mayers (3/24) were the picks of the Windies’ bowlers, sharing seven wickets between them and laying waste to South Africa’s top five. Jason Holder (1/24) and captain Kraigg Brathwaite (1/10), were the other wicket-takers, Holder getting the big wicket of Quinton de Kock without scoring.