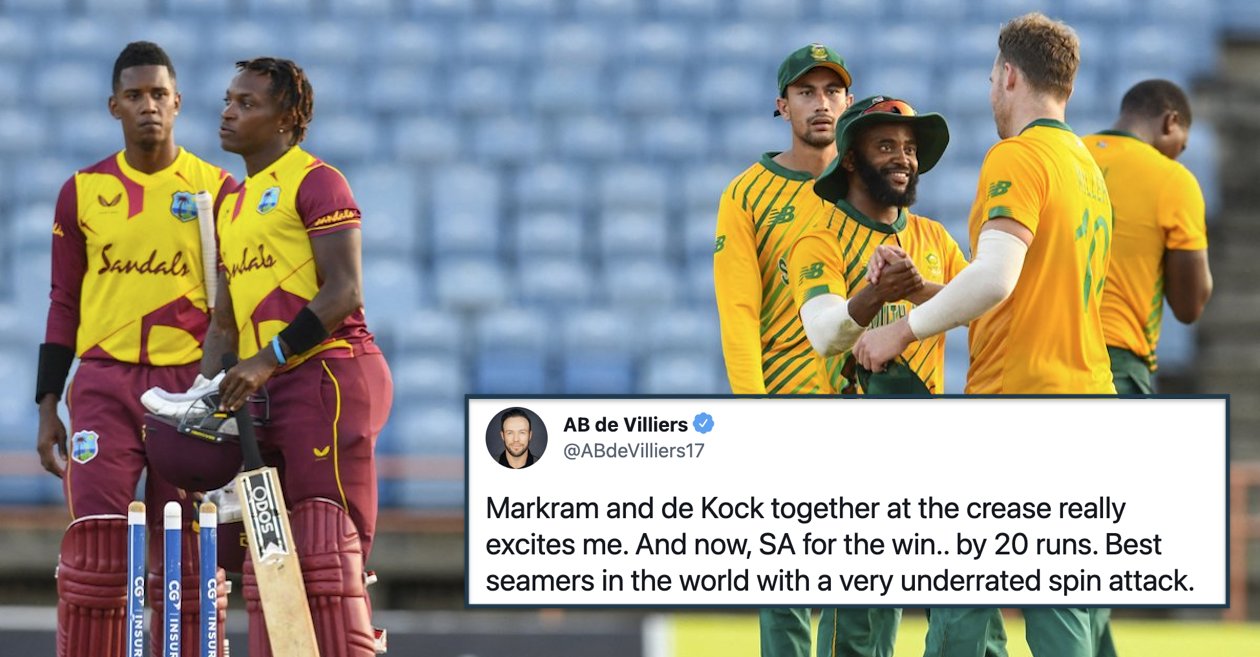 South Africa capitalized on the misfiring power-hitters of the West Indies to claim a series-clinching 25-run victory in the final T20 International of their five-match contest at the National Cricket Stadium in Grenada on Saturday. Defending a total of 168 for four, thanks to half-centuries from Aiden Markram and Quinton de Kock, all the Proteas’ main bowlers made significant strikes to limit the defending World T20 champions to 143 for nine despite a typically flamboyant 52 from opening batsman Evin Lewis.

Fast bowler Lungi Ngidi, who endured a hammering through the first four matches, bounced back with three wickets.

However, the outstanding bowling effort was again produced by Tabraiz Shamsi, the left-arm wrist-spinner improving on his previous record economical figures in the last two matches by conceding just 11 runs through his four overs in claiming the wicket of Chris Gayle.

He was the inevitable choice as ‘Man of the Series’ taking seven wickets across the five matches at the outstanding economy rate of four runs per over.

West Indian hopes of coping with an increasingly challenging run-rate eventually rested on the shoulders of their captain Kieron Pollard.

However he was hampered by a leg injury sustained when scampering a quick single and when Mulder removed Pollard and Andre Russell off successive deliveries in the 15th over, the match tilted heavily in favour of the visitors.

For South Africa, it was a first T20 International series triumph for almost two years.

It was also the first under the captaincy of Temba Bavuma and coaching stewardship of Mark Boucher.

“This is really a tremendous effort for our side, and especially for me in just my first T20 International, it is something to build on going forward,” said Mulder.

Pollard was bitterly disappointed with his team’s failure yet again to chase down a moderate total.

“It looks as is we haven’t learned much from these matches because we keep making the same mistakes, and that is the definition of insanity,” said the captain.

Next up for the home side is a five-match series against Australia, starting next Friday in St Lucia.

“We have to show that we are serious about our cricket and ready to keep on improving in the countdown to the World T20.”

Earlier, Markram’s highest T20 International score and another half-century from the consistent de Kock set the pace for South Africa.

Markram’s 70 off 48 balls with four sixes and three fours came as he and de Kock (60 off 42 balls with two sixes and four fours) put on 128 for the second wicket after Bavuma fell without scoring in the first over bowled by Fidel Edwards.

That partnership was the highest for any wicket by South Africa in T20 Internationals against the West Indies.

Bavuma had chosen to bat first on winning the toss, the first time a captain opted to do so in this series.

It was a decision no doubt influenced by the tourists’ failure to chase a target of 168 in the previous fixture two days earlier, a result which allowed the home side to pull level at 2-2.

Despite the excellent platform provided by Markram and de Kock though, the innings lost momentum over the final ten overs, especially when Edwards separated the productive pair by having de Kock, who tallied 255 runs in five innings in the series, caught by Russell at long-on.

Edwards’ figures of two for 19 were the best for the West Indies bowlers with captain Pollard utilizing seven bowling options, including himself, on a pitch where run-scoring was again increasingly difficult as the innings wore on.