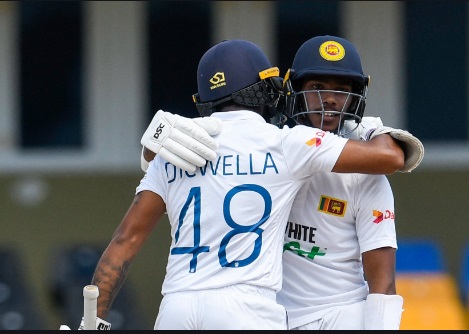 Day 4 report: Pathum Nissanka scored a century on debut and Niroshan Dickwella fell four runs short of a maiden century on Wednesday as Sri Lanka took control of the first Test against the West Indies on the fourth day.

Starting 102 runs behind in the first innings, Sri Lanka reached 476 in their second innings for a lead of 374.

Sri Lanka then made an important breakthrough in 20 overs before stumps, dismissing John Campbell (11) to leave the West Indies 34-1, still 340 runs behind. Captain Kraigg Brathwaite was 8 not out and Nkrumah Bonner 15.

The day began with promise for the West Indies, who handed the second new ball to Alzarri Joseph instead of Kemar Roach. Joseph repaid the decision with a wicket from the fifth ball of the day, bowling Dhananjaya de Silva who resumed on 46 and had just posted his eighth Test half-century.

Nissanka and Dickwella came together at that point and batted through almost all of the first and second sessions in a partnership that produced 179 runs for the sixth wicket.

The 22-year-old Nissanka was patient and careful in his shot selection, reaching his half-century from 126 balls with five boundaries. Dickwella’s 50 came from 103 balls and included three boundaries.

Dickwella lived dangerously later in his innings. He was dropped by Bonner at gully from Jason Holder’s bowling when he was 44, chasing a short and wide delivery. His cut shot went directly to Bonner at waist height but the fieldsman, off-balance, dropped a simple chance.

On 74, Dickwella nicked a ball from Joseph down the leg side, directly to wicketkeeper Joshua Da Silva but the only appeal from the West Indies was a half-hearted one from the bowler.

Dickwella surpassed his previous highest test score of 92 with a four off Roach. Five balls later, he was struck a glancing blow on the helmet by Roach and the ball dropped and spun back, hitting the stumps without removing the bails.

Nissanka reached his 100 with an outside edge wide of slips, from 240 deliveries and with only six fours in a particularly watchful inning which steadily built Sri Lanka’s advantage.

He is the fourth Sri Lankan to make a century on Test debut and the first to do so outside Sri Lanka.

“I wasn’t aware of those records,” Nissanka said. “With the state of the game, the team needed me to perform and I’m glad to perform for the team.

“The discussion (with Dickwella) was mainly that we have to try and drag it out for as long as possible to get a big score and make sure the bowlers have enough runs to bowl at.

“If the bowlers keep the ball in the right area, there’s still a chance of bowling the West Indies out. I think we have a good chance.”

Nissanka was out in the second over after tea, playing an uncharacteristic slog sweep as he tried to lift the run rate, only to be caught at the deep backward square by Kemar Roach from the bowling of Rahkeem Cornwall.

Dickwella looked sure to go onto his first Test century. But at 96 he played a lazy shot to a wide ball from Roach, looking to dab the ball down to the third man. Instead, he dragged it back onto his own stumps.

While Roach loudly celebrated the wicket, Dickwella looked stunned, leaning on his bat before slowly trudging back to the pavilion.

Day 5 : The scorecard might suggest a dull draw at the end of it all, but this match had a lot — Holder and Roach’s exemplary seam bowling on the first morning, Thirimanne battling it out alone, Lakmal absolutely bowling his heart out over two innings, the new kid on the block, Pathum Nissanka starting his career with a century, and quite fittingly, in the end, Bonner going on a blockathon. There’s something with 2021 and Tests going into final hours, almost as if it were laughing in the faces of those four-day advocates. So this was me, Vineet Anantharaman, bringing you this in the company of Pradeep Krishnamurthy, Sriram AS, and our scorers, Siva and Harish. Until Antigua again, and hopefully, a pitch that stays lively for just that little bit longer, ta!!