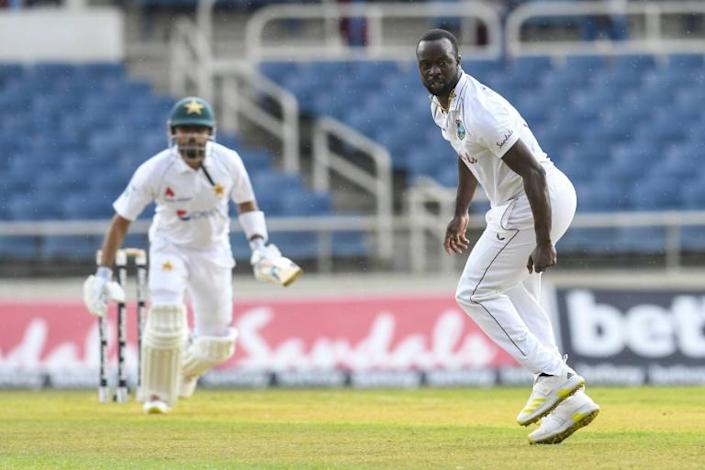 Babar Azam’s unbeaten half-century kept his team’s hopes alive of setting a competitive target for the West Indies in the final innings of the contest with Pakistan reaching 160 for five in their second innings at the close of the rain-affected third day of the first Test at Sabina Park on Saturday.

Having trailed on first innings by 36 runs, the tourists will start day four ahead by 124 with Azam on 54 and Faheem Ashraf on 12, the pair having put on 39 so far for the sixth wicket.

Pakistan’s captain almost exactly replicated the caution and determination of his opposite number Kraigg Brathwaite of a day earlier.

He limited his usually fluent strokeplay to the barest minimum in nearly four hours at the crease in which he faced 139 balls and hit seven fours.

Ashraf was equally watchful but the West Indies have only themselves to blame for him still being at the crease as Jermaine Blackwood floored a straightforward chance at third slip off the medium-pace of Kyle Mayers shortly after the left-hander arrived at the crease.

He had come to the middle following the demise of Mohammad Rizwan at 121 for five at the start of an extended final session after a heavy mid-afternoon shower interrupted play.

Azam and Rizwan had put on 56 for the fifth wicket but when the wicketkeeper-batsman fell to Jason Holder for 30, Pakistan were in danger of capitulating before the close of play.

While those fears were averted, it looked a distinct possibility when they were reduced to 65 for four just after lunch as the West Indies opening bowlers again made early inroads against a suspect batting line-up

– ‘Patient as possible’ –
Yet as bleak as the situation appeared in early afternoon for the visitors on their Independence Day, Shaheen Shah Afridi had gotten them off to the perfect start in the morning by taking the last two West Indies first innings wickets to dismiss the home side for 253.

However that satisfaction was immediately tainted by Kemar Roach, who left the visitors in more than a little discomfort with a wicket in each of his two spells before lunch.

Once again showing the value of his experience and accuracy, the Barbadian trapped Imran Butt leg-before without scoring.

After an increasingly promising 55-run stand between the other opener, Abid Ali, and former captain Azhar Ali, Roach produced a sharp off-cutter to Azhar which clipped the right-hander’s leg-stump as he shuffled too far across the crease.

While Azhar’s reaction to the dismissal suggested that the ball had also kept lower than he anticipated, it was just reward for the persevering Roach who had earlier seen the normally safe pair of hands of Jason Holder spill a regulation catch at second slip off the same batsman.

Holder atoned for that surprising lapse when he gave Jayden Seales his first wicket of the innings via Abid Ali’s edged cut high to the right of the tall allrounder at second slip.

There was even greater jubilation in the West Indies camp three balls later when first innings top-scorer Fawad Alam edged another Seales delivery to wicketkeeper Joshua da Silva before he had scored.

At that stage Pakistan had lost three wickets for nine runs either side of the lunch interval and were in desperate need of stability, which Babar together with Rizwan and then Ashraf provided.

“I’ve definitely enjoyed bowling on this surface. It’s just about remaining as patient as possible and doing the same things we did earlier in the innings when we got those wickets,” said Seales.

“A target anywhere around the 170-200 region should give us a good chance.”

Pakistan will certainly consider themselves as having a better-than-even chance of victory should their captain and the rest of the lower-order lift the overall lead closer to the 200-run mark on a surface which continues to examine the technique and resilience of all batsmen.