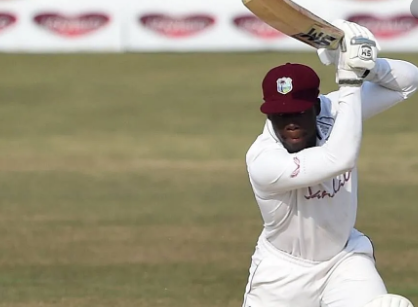 West Indies was dismissed for 409 in its first innings. Gabriel (2-31) helped to reduce Bangladesh to 105/4 at stumps on the second day.

Joshua Da Silva earlier struck a superb 92 for West Indies with Nkrumah Bonner hitting 90 and Alzarri Joseph scoring 82. At 11-2, captain Mominul Haque and opener Tamim Iqbal started the repair job. Their 58-run partnership was ended when the skipper played a cut shot against offspinner Rahkeem Cornwall to be out for 21. Fast bowler Joseph dismissed Tamim for 44.

A day that belonged to the visitors. If getting 409 wasn’t enough, the Windies managed to disturb the applecart further by picking up 4 wickets before stumps on day 2. Earlier in the day, Bonner, Da Silva and Joseph missed out on prospective tons after stitching important partnerships in the first two sessions. At one point, it seemed the visitors will get more, but Bangladesh managed to remove the last 4 wickets for 25 runs. The start with the bat, though, was disastrous and were in no time reduced to 11 for 2. Tamim looked fluent, but failed to convert his start into a big one. Bangladesh’s crisis man – Rahim – is still out there and needs to do better on day 3.