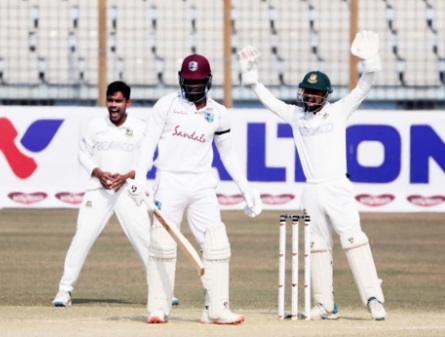 Earlier in the day, West Indies opted to bat first after winning the toss. Their openers almost kept the hosts at bay with Brathwaite and Campbell adding 66. Campbell fell but that was the only success for Bangladesh. However, they returned with more energy in the 2nd session to pull things back in their control. The medium-pacers did the job for them in that second session with Taijul making sure easy runs were not given from his end. Jayed got 2 while Sarkar managed the big wicket of Brathwaite.

In the fifth over of the second session, Abu Jayed bowled Moseley (7) while the visitors only added three runs in that session.

Just three runs behind of half-century, skipper Brathwaite (47 off 122 balls; 4 fours) lost his wicket as Soumya Sarkar dismissed him after Najmul Hossain Shanto took a good catch at slip.

Inside the next half-an-hour, Abu Jayed took the crucial wicket of Kyle Mayers, who was the hero in the last Test by scoring an unbeaten double-century in the fourth innings. However, the other hero of that fourth innings, Nkrumah Bonner put the hosts into the fight on the first day of this Dhaka Test by producing his strong batting performance.

At tea, West Indies scored 146/4. In the crucial time, Bonner and Jermaine Blackwood put the 62 runs partnership for the fifth wicket. But Taijul Islam ended that partnership after he dismissed Blackwood (28) after he caught and bowled with a dive. Just some overs before that wicket, Bonner completed his second Test fifty and he continued strong batting for the day.

At the end of the day, while Bonner scored 74 not out off 173 balls (6 fours), wicket-keeper batsman Joshua Da Silva scored 20 not out off 45 balls (1 four). They have already put the 45 runs partnership for the unbroken sixth wicket.

Bangladesh have done well in this session. West Indies were scoring at a decent click. The hosts managed to slow things down and with Taijul getting the wicket of Blackwood, they took further control of the session. They kept Bonner silent in this session and didn’t allow him easy runs. Overall, it is a decent effort from the Bangladeshi bowlers in this session. However, they would’ve loved a couple of more wickets in this closing hour.

The session saw Bonner and Blackwood continue their good work from the second session. They added 50-plus and were looking set for a big one before Taijul removed Blackwood with a soft dismissal. Bonner though has continued his fine form from the first Test and is looking set for a big one on Day 2. Da Silva gave him company nicely in this last hour and against the second new ball. The two have managed to add 45 runs and will return to take things forward on Day 2.

Though Bangladesh bowlers made a strong comeback after the West Indies openers set up a positive start, one of the last Test victory heroes for the Caribbean team, Nkrumah Bonner once again batted strongly to end the opening day of the Dhaka Test in better way.