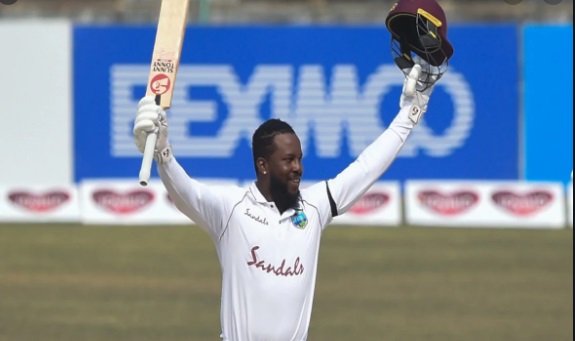 West Indies’ Kyle Mayers had a Test debut to remember and one for the ages as he hit an unbeaten 210 in the fourth innings of the first Test against Bangladesh in Chattogram and helped his side chase down a mammoth 395 runs with three wickets in hand to win the Test in the final session on Day 5. West Indies were in trouble at 59 for 3 at one stage but Mayers teamed up with Nkrumah Bonner to add 216 runs for the fourth wicket to revive the West Indies innings. Mayers brought up his 100 off 178 balls and the double hundred off 303 balls.

Bangladesh then declared their second innings on 223 for 8, setting West Indies an improbable 395 runs to win. And when Mehidy Hasan ran through the West Indies top order dismissing skipper Kraigg Brathwaite for 20, John Campbell for 23 and Shayne Moseley for 12, the visitors were in all sorts of trouble.

However, debutant Mayers and Bonner had other plans as they took the West Indies to Lunch at 197 for 3 and then to Tea at 266 for 3. The final session saw the West Indies accelerate and go for glory.

The Bangladesh Cricket Board (BCB) announces the squad for the three-match ODI series against the West Indies. Off-spinner Mahadi Hasan and pace bowlers Hasan Mahmud and Shoriful Islam are the uncapped players in the squad.