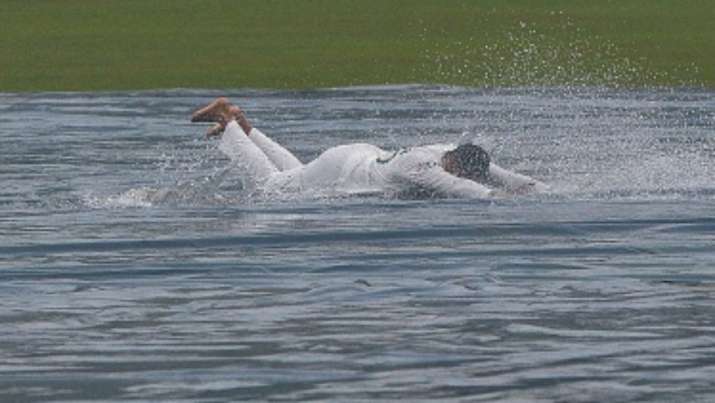 Bangladesh’ Shakib Al Hasan brought out his childhood avatar as he skidded over the wet covers on a washed-out Day 2 of the second Test between Bangladesh and Pakistan at the Sher-e-Bangla Stadium in Dhaka. The video of him having a gala time went viral on the internet as fans all across the world reacted to the all-rounder’s video. Shakib wore a bright smile on his face and resembled a happy kid just trying to enjoy life. The event took place after rain played spoilsport just after Lunch. No play was possible due to heavy downpour in the first session.

“A fan posted the video with the caption: Excitement when the play is officially called off for the day. #BANvPAK”

Few of the fans even joked about Shakib catching cold due to the alleged play-time in the water.

“Next up Shakib is ruled out of NZ series due to fever and cold. Now he officially has a reason.”

As far as cricket is concerned, rain never allowed cricket proceedings to take its course in its entirety.

Azhar Ali played a masterclass and scored his 34th career fifty while Babar Azam complimented him well as he went in not out on 71 runs. Both batters joined hands and added 118 runs for the unbroken third-wicket partnership.

Taijul Islam was the only Bangladesh bowler to pick wickets as he grabbed both the breakthroughs for his team.

He got rid of the dangerous looking Abid Ali and fellow opener Abdullah Shafique for 39 and 25 runs respectively.