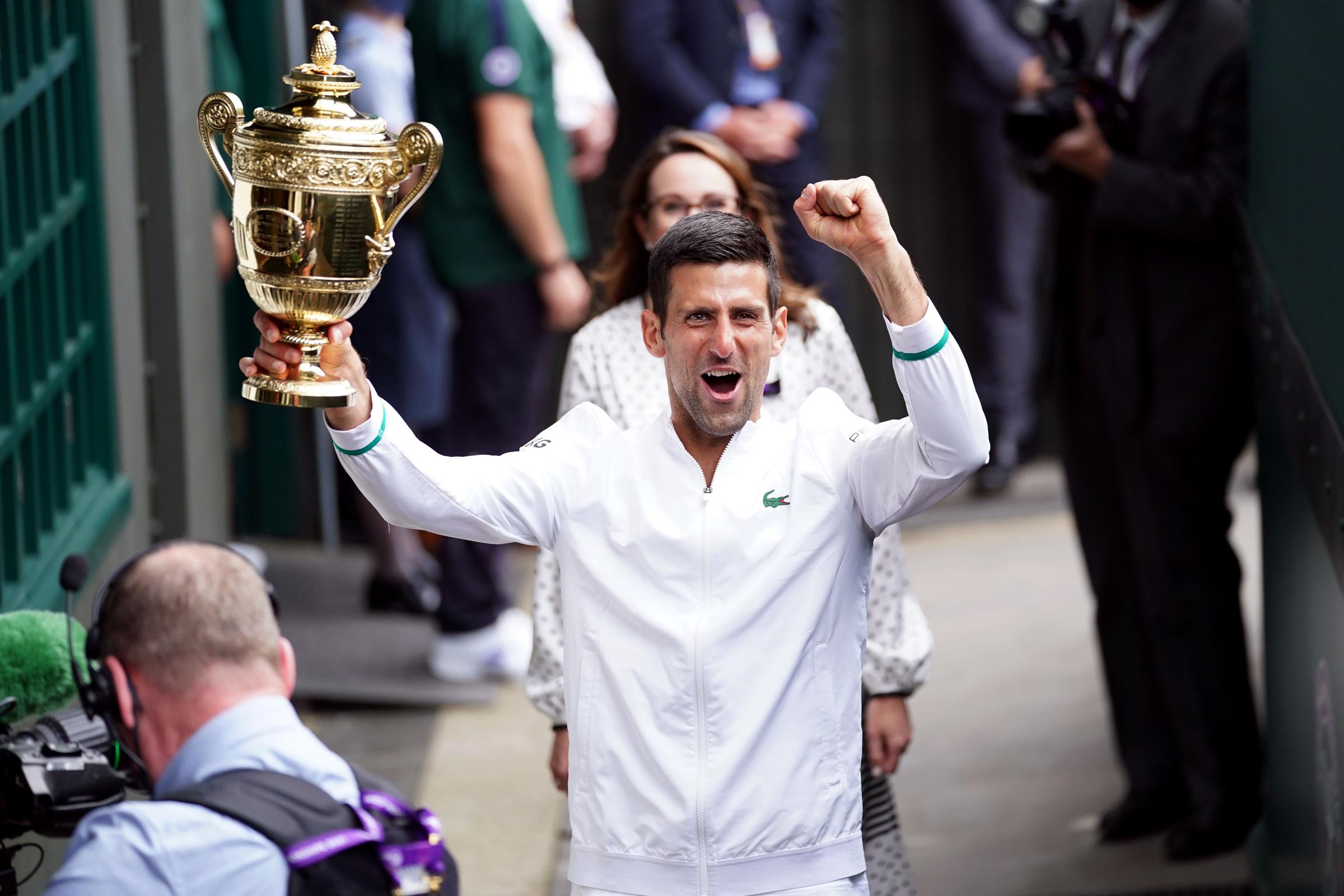 After winning a record-equalling 20th Grand Slam title, Novak Djokovic paid tribute to his rivals Roger Federer and Rafael Nadal, saying they are the reason “I am where I am today”. Djokovic beat Matteo Berrettini in the men’s singles Wimbledon final on Sunday to draw level with Federer and Nadal on 20 majors. Together, they are known as the “Big Three” because of their dominance for nearly two decades. When Djokovic was asked what it meant to him to level with the other two, the Serbian tennis star said jokingly, “It means none of us, three, will stop (here).”

After a brief pause, he added, “Look, I have mentioned this before, many times, and I have to pay a great tribute to Rafael and Roger. They are legends…” As he continued a huge round of applause from the audience at the Centre Court in London interrupted him. “…legends of our sport,” Djokovic concluded his sentence.

“They are the reason that I am where I am today”

20-20-20. What a privilege it has been watching all three #Wimbledon pic.twitter.com/DRMa1no6Xr

But he continued to shower praise on Federer and Nadal.

“They are, I think, the reason that I am where I am today. They have helped me realise what I need to do in order to improve, to get stronger – mentally, physically, tactically.”

Federer, in a tweet, congratulated Djokovic on his “20th major”. He tweeted, “I’m proud to have the opportunity to play in a special era of tennis champions. Wonderful performance, well done!”

Congrats Novak on your 20th major. I’m proud to have the opportunity to play in a special era of tennis champions. Wonderful performance, well done!

Nadal, too, praised his “amazing achievement”. He added, “20 Grand Slam titles is huge and it is amazing that we are 3 players tied on this. Well done and, again, congrats to you and your team for this!”

Congrats @DjokerNole on this amazing achievement. 20 Grand Slam titles is huge and it is amazing that we are 3 players tied on this. Well done and, again, congrats to you and your team for this!@Wimbledon

Djokovic, 34, recalled the time when he broke into the top 10 for the first time, in March 2007, he lost most of the big matches for three years against “these two guys”. Then something began to shift towards the end of 2010-11 season, he said, adding the last 10 years have been an “incredible journey that is not stopping here.”

Several people commented on the video to praise Djokovic’s humble tribute to his rivals. One user said the ‘Big Three’ should be called the “Grand Three” for having won 20 titles each.

It is indeed a great history in tennis today. We have a trio that have won 20 grand slams each.
The Big 3 should be called Grand 3@RafaelNadal @rogerfederer @DjokerNole #Wimbledon2021 #Wimbledon #WIMBLEDONxESPN

Another said the game will be “different” when these three retire from tennis.

Novak Rafa Roger when these retire tennis will be different.
I can already sense it.

With the Wimbledon 2021 victory, Djokovic has won the first three Grand Slam titles of this year and now has to win one more to complete the calendar Grand Slam.