Watch: Andre Fletcher’s “No Look Six” In CPL Match Is A Thing Of Wonder 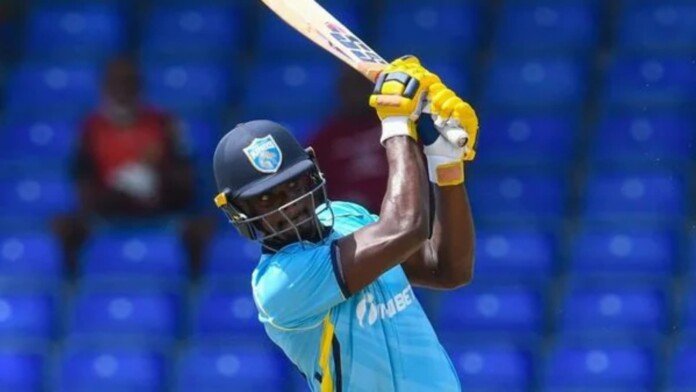 Saint Lucia Kings’ Andre Fletcher hit a marvellous “no look six” in a Caribbean Premier League (CPL) 2021 match against Trinbago Knight Riders (TKR). TKR’s Isuru Udana was in the firing line as a delivery at the stumps was picked up and deposited deep into the mid-wicket stands by Fletcher, who didn’t even bother to look at the ball after he made contact even as he traced his bat swing back to its mark after playing the shot. Fletcher’s 25-ball 28 was laden with three sixes and it went a long way in ensuring St Lucia’s narrow five-run win over the Knight Riders.

After being asked to bat by Knight Riders, St Lucia Kings posted 157 for 5 even as Knight Riders’ Ravi Rampaul returned 3 for 29.

The Knight Riders started well but despite twin unbeaten knocks of 40 by Colin Munro and Tim Seifert – the latter coming off just 16 balls – couldn’t cross the finish line and fell tantalisingly short, finishing 152 for 3 in 20 overs.

Chase was the most economical bowler for St Lucia Kings, conceding just 17 runs off four overs in return for a wicket.

This was St Lucia’s first win in the tournament this year as they are still placed at the bottom of the table with two points and a net run rate of -2.875.

The Knight Riders, on the other hand, are placed third with two points from three games but a better net run rate of +0.197.