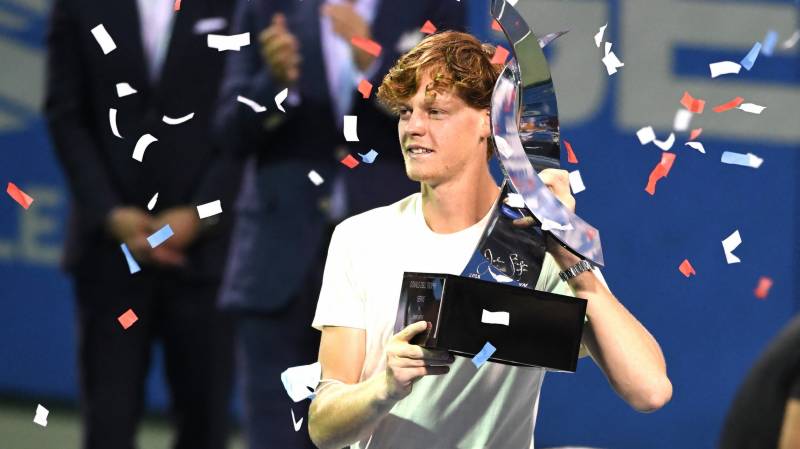 World number 24 Sinner, a 19-year-old who won at Sofia last year and Melbourne in January, took the top prize of $350,755 on the Washington hardcourts.

“I’m very happy about this tournament and win,” Sinner said.

McDonald, ranked 107th and playing in his first ATP final, denied Sinner on 16 of 21 break chances, 10 in the first set, and battled from 5-2 down to level the final set before falling.

“A big fight… in every single part of the game,” Sinner said. “I tried to stay calm and work for my chances.”

Sinner became the youngest ATP 500-level champion in 146 events since the category was created in 2009, breaking the mark 20-year-old Alexander Zverev set at Washington in 2017.

“I don’t put much weight on that,” Sinner said. “There are a lot of players who have done much better than me. It’s not about the youngest. I just want to work hard and play good matches.”

“I’m not looking if I’m the youngest because the road is long,” he said. “There’s still much work to do. I’m already focusing on next week.”

Sinner, who made the last eight at the 2020 French Open, was the first Italian finalist in the US capital event’s 52-year history.

Sinner will jump to a career-high 15th in Monday’s rankings while McDonald will rise to 64th.

Sinner dropped two match points in the eighth game — the Italian netting a forehand and McDonald hitting a forehand winner — and made four unforced errors in the ninth, allowing McDonald to break back and hold again to reach 5-5.

Sinner held at love on his ninth ace and broke to claim the match after two hours and 53 minutes when McDonald netted a backhand.

“In the third set, I tried to get a little bit up with the rhythm, go faster, tried to serve it out,” Sinner said. “We were both there trying to stay mentally strong.”

“It was physical but also mental,” Sinner said. “I had a lot of chances. First, he was playing better in crucial moments. I tried to work for one more chance and one more chance. It was a little bit of a roller coaster.”

After breaking at love in the sixth game, Sinner served for the first set in the ninth, but McDonald broke again on a forehand winner.

McDonald saved six break points in a tense 10-minute 10th game before holding to pull level and, after Sinner held at love to 6-5, saved four more breakpoints in the 12th game before netting a backhand to finally surrender the set.

In the second set, McDonald saved two break points to hold for 3-3, then broke when Sinner netted a backhand and held twice to force a third.

Rafael Nadal Eyes ATP Toronto Masters Crown After “Tough” Injury Layoff
Stefanos Tsitsipas calls for coaching in tennis matches to be allowed, ‘An eye from the outside can always help’