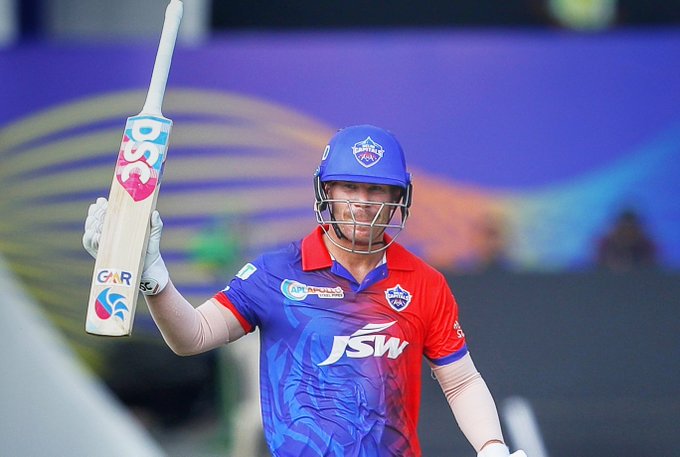 Delhi Capitals produced a magnificent outing with the bat in their fourth game of the 2022 Indian Premier League, posting 215/5 in 20 overs against the Kolkata Knight Riders on Sunday. The side’s openers, Prithvi Shaw and David Warner feasted on a quality bowling attack before Delhi Capitals survived a scratchy middle-order to put their first 200+ score in the current edition of the tournament.

If Shaw-Warner added 93 to set the platform, Shardul Thakur (29 not out 11 balls) and Axar Patel (22 off 14 balls) added 49 in just 3.2 overs to finish the innings in style. Warner (61 off 45 balls) and Shaw (51 off 29 balls) were facing one of the most lethal pace attacks of this edition but to their advantage, it was perhaps the best batting track.

En route to his 61-run knock, Warner also scripted a milestone in the Indian Premier League. The Aussie batter went past the 5,500-run mark in the innings, becoming the only fifth player in the history of the tournament to do so. Warner joined Virat Kohli, Shikhar Dhawan, Rohit Sharma, and Suresh Raina among batters to reach the mark.

The Aussie left-hander also became the fastest batter to reach the milestone.

Warner completed his first half-century of this edition with a six off Andre Russell.

Earlier, Umesh Yadav (1/48 in 4 overs) had his first bad outing in this IPL, while Warner also launched into Pat Cummins (0/51 in 4 overs) with two boundaries over cover as 50 came in four overs.

The Delhi Capitals will be raring to get their season back on track after consecutive defeats that saw them coming apart at the seams against the Lucknow Super Giants and the Gujarat Titans.