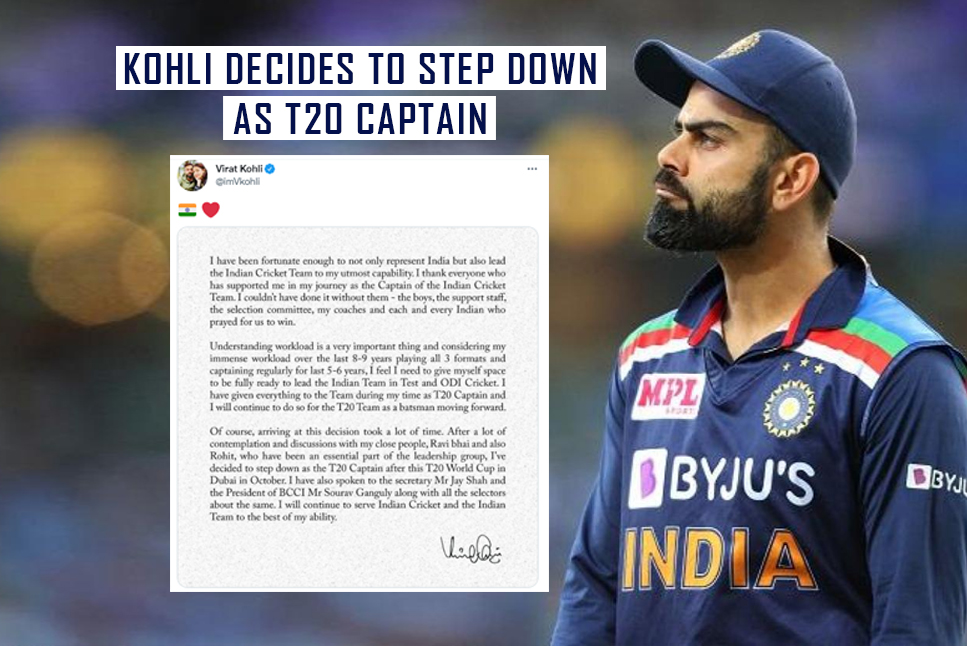 Indian captain, across all formats of the game, Virat Kohli will step down as T20 captain at the end of the T20 World Cup in October-November this year.

He announced the decision to quit T20 captaincy on Twitter, writing that he took the decision after many discussions with the leadership group within the Indian team.

“Arriving at this decision took a lot of time. After a lot of contemplation and discussions with my close people, Ravi bhai and also Rohit, who has been an essential part of the leadership group, I’ve decided to step down as the T20 captain after this T20 World Cup in Dubai in October,” wrote Kohli in his official statement.

Kohli further said that he has informed about the decision to BCCI secretary Jay Shah and president Sourav Ganguly and “will continue to serve Indian cricket and the Indian team to the best ability”.

“Understanding workload is a very important thing and considering my immense workload over the last 8-9 years playing all 3 formats and captaining regularly for last 5-6 years, I feel I need to give myself space to be fully ready to lead the Indian team in Test and ODI cricket,” read his statement.

BCCI secretary Jay Shah thanked Virat for his contribution as T20I captain. He wrote on his twitter: “As a young talent the focus and determination you have showed as the captain is unmatched. The most impressive aspect was the way of maintaining balance between captaincy and individual performance.” Virat Kohli will quit T20 captaincy after ICC T20 World Cup 2021 and Rohit Sharma is expected to take over. Sportzpics for BCCI

Board president Sourav Ganguly too thanked Virat for his ‘tremendous performance’ as captain and said the decision has been taken looking at the future of Indian cricket.

“Virat has been a true asset for Indian Cricket and has led with aplomb. He is one of the most successful captains in all the formats. The decision has been made keeping in mind the future roadmap. We thank Virat for his tremendous performance as the T20I Captain. We wish him all the best for the upcoming World Cup and beyond and hope that he continues to score plenty of runs for India,” Ganguly was quoted as saying on BCCI’s website.

BCCI is yet to announce the new T20I captain but chances are high for Rohit Sharma to take the leadership role. He has captained India in limited-overs in the last four years whenever Virat was rested, one of his major wins being the Nidahas Trophy (20 overs) and the Asia Cup (50-overs). Additonally, Rohit has won the IPL trophy five times for Mumbai Indians.

After the T20 World Cup, expect Rohit to become the incharge of the India’s T20 squad.

The T20 World Cup begins on 17 October in Oman with the qualifiers. India will play the first match against Pakistan on 24 October in Dubai.