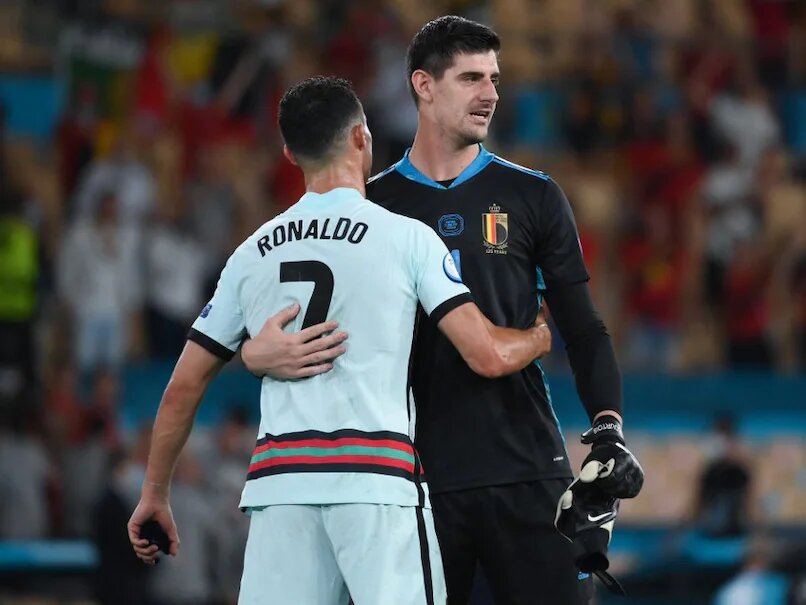 Defending champions Portugal exited the European Championships after losing 0-1 to Belgium in Seville. Cristiano Ronaldo showed the odd spark but the 36-year-old neither broke the international goals record nor added to his five for Euro 2020. The Portuguese star was overshadowed by Thorgan Hazard, whose stunning strike from distance settled what was a scrappy last 16 tie in Spain. Belgium will now face Italy in a blockbuster quarterfinal clash on July 2 (local time). While Thorgan Hazard’s brilliant goal was the standout on the night, the real viral moment came after the final whistle.

After the end of the match, Cristiano Ronaldo was seen having a quick word with former Real Madrid teammate and Belgium goalkeeper Thibaut Courtois.

The official Twitter handle of UEFA Euro 2020 shared the video which didn’t take too long to go viral.

“Lucky, eh? (The ball) didn’t want to get in today! Good luck man,” Ronaldo was heard telling Courtois after the final whistle.

Belgium though will be sweating over the fitness of star duo Kevin De Bruyne and Eden Hazard, both of whom hobbled off injured and will undergo scans on Monday.

For all the superstar names on the pitch, it was Eden Hazard’s less-heralded brother Thorgan who proved decisive, the Borussia Dortmund winger who Eden once said had even more talent than him.

“In these games, if you have a chance you have to have a go,” Thorgan said. “It went in, with a bit of luck and it was the goal that got us through. It’s a dream for me.”