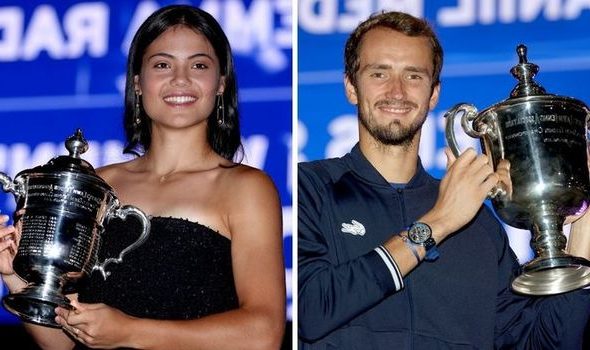 Medvedev, who prevented world number one Novak Djokovic from sweeping the first men’s calendar Grand Slam since 1969 with victory in the US Open final, said “my body is not 100% ready”.

The world number two Russian lost in the fourth round of the Indian Wells Masters to Grigor Dimitrov this week.

He will now focus on a strong end to the season when he will defend his ATP Finals title and lead Russia in the Davis Cup finals.

“With the calendar this year being extremely tough I felt that my body was not 100% anymore,” Medvedev wrote on social media.

“This decision was very tough for me but it has to be done in order to be able to finish the 2021 season strong”.

Medvedev’s decision also means his slim hopes of deposing Djokovic as year-end world number one are almost certainly over.

On Thursday, 18-year-old Raducanu pulled out of the Kremlin Cup, citing a “tournament schedule change”.

The Briton suffered a second-round loss to Aliaksandra Sasnovich at Indian Wells in her first outing since her shock US Open triumph.

“Unfortunately, I’ve had to make a tournament schedule change and won’t be able to play Moscow this year, but I hope to compete there and in front of the Russian fans next year,” she said.

“I look forward to returning to the Tour in the next couple of weeks.”