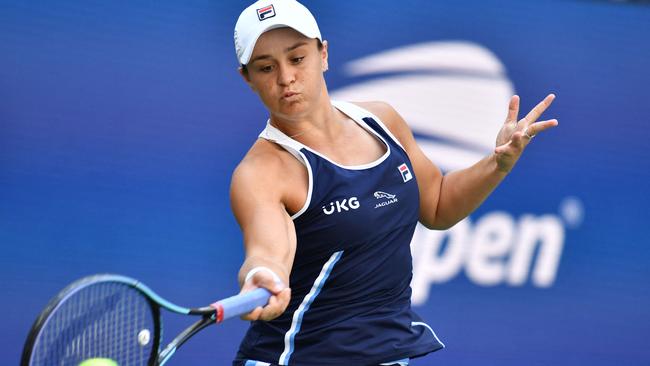 New York: Australia’s Ashleigh Barty says she isn’t carrying momentum into the US Open from winning Wimbledon or any sense she belongs in the later rounds just because she’s world number one.

That grinder’s mentality just might help her finally get beyond the fourth round at the US Open for the first time as she aims for a third career Grand Slam title and sixth trophy of the year.

“A massive part of our year is accepting that you don’t win every single match and you’re certainly not entitled to make big finals,” Barty said Thursday. “You have to earn that right.”

Barty ground out a 6-1, 7-6 (9/7) victory over Russian Vera Zvonareva in the first round and defeated Danish 18-year-old Clara Tauson 6-1, 7-5 on Thursday at Arthur Ashe Stadium.

“I think chipping away in these first two matches has been good,” Barty said. “The tennis hasn’t been as clean as it was a couple weeks ago, but we accept that.

“We keep working and go back to the practice court and now we give ourselves another opportunity in the third round to try and rectify that.”

Barty, who leads the WTA in aces this year, won two weeks ago at Cincinnati without dropping a set to become the clear favourite in New York. She also won at Miami, Melbourne and Stuttgart as well as Wimbledon.

“Each and every round is a test,” Barty said. “I don’t come into this tournament with any expectation of myself to feel entitled to go deep or win the tournament or whatever.

“I just have to play each and every match as I would every other tournament and be prepared to play my best tennis. That’s all I can ask from myself. Whether that’s a first round or a final, my preparation and everything doesn’t change.”

Barty, 25, added Wimbledon to the 2019 French Open in her Slam trophy case but refuses to accept momentum as a reward.

“Wimbledon was a long time ago,” she said. “There’s momentum in a sense of that was one of my greatest goals was to win that tournament.

“I think playing and understanding how to win Grand Slams is very unique. Two weeks is a long time to be focused, have a bit of luck, stay healthy. I’ve learned the hard way that sometimes it doesn’t always go your way.

“It’s a different surface, different tournament, completely different conditions. So it’s hard to take too much confidence or momentum from that.”

Disruptions such as a Wednesday night storm that made it hard to reach Ashe on Thursday are another X-factor Barty must navigate.

“Trying to grasp what was happening here on-site was quite unbelievable. I know that there has been a lot of flash flooding and a lot of people in trouble,” she said.

“It took us a while to get in this morning, but we kind of allowed for that. We were prepared for it in a way as best we could be, and we just kind of got on with it.”