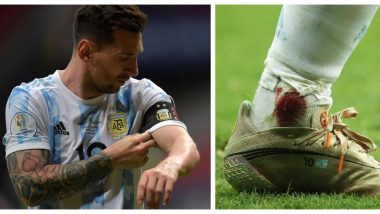 Football fans all around the world praised Argentina captain Lionel Messi for playing with a bleeding ankle during the Copa America clash against Colombia. Fans took to Twitter to showcase their appreciation towards Messi as he led his team to the tournament final with a win against rivals Colombia on penalties. Messi provided the assist as Lautaro Martinez open the scoring for Argentina in the seventh minute of the game while Luis Diaz levelled for Colombia in the 61st minute. No teams could score in the allotted 90 minutes as the game went into extra time. Brilliant defense from either side took the game to penalties where Argentina edged past 3-2.

In the 55th minute of the game, Messi was victim to a rash tackle by Colombia’s Frank Fabra, resulting in a bloodied ankle.

Fabra, who plays for Argentine club Boca Juniors, received a yellow card for the foul.

Despite the painful blow, Messi continued to shine for his national side for the rest of the match, something which was hugely acknowledged and appreciated by the football fans all over the world.

My foot is bleeding, It’s ok I'm in the final 🏆👏🏻. #messi #ميسي pic.twitter.com/NMyXXVl7Hv

An emotional fan praised Messi and wrote, “This bloody ankle carrying the hopes of an entire Country plus millions and millions of fans worldwide #VamosArgentina #CopaAmerica #Messi.”

I've no words to explain this passion!! #Messi is bleeding yet is trying his best to help the team and he almost assisted 1 Goal with that foot but This Lautaro messed it up!How can hell can someone hate this guy!! No Words can describe this level of unconditional love he his🇦🇷💝 pic.twitter.com/CjJAjQBqGk

Argentina will face Brazil in the final on July 11 at the Maracana Stadium in Rio de Janeiro. Brazil edged past Peru in the first semi-final through a Lucas Paqueta goal.