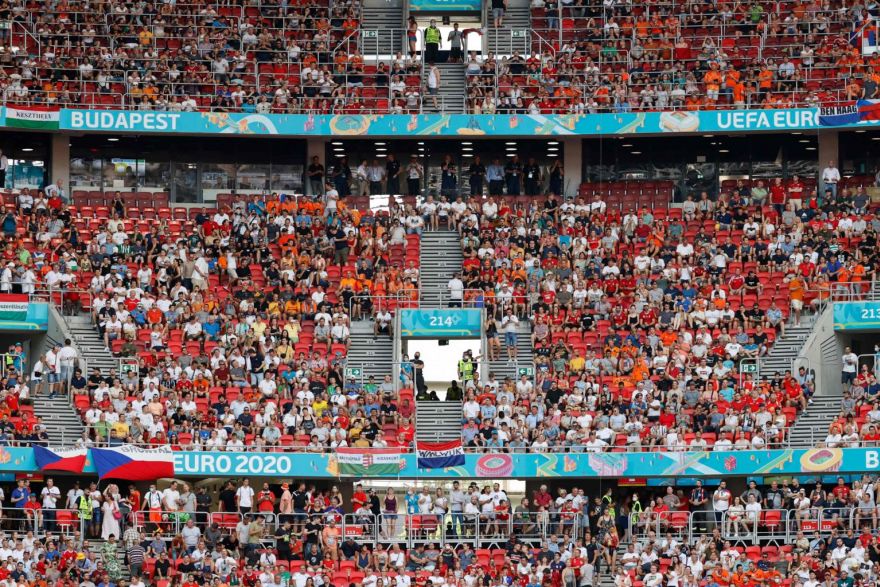 The World Health Organization (WHO) called Thursday for better monitoring of Euro 2020 football matches as Covid cases rise again in Europe, fuelled by the deadly Delta variant that is racing around the globe. Hundreds of cases have been detected among spectators attending Euro matches taking place across Europe, with carriers of the Delta strain detected in Copenhagen, and infected Scots and Finns returning from London and Saint Petersburg respectively. Russia posted record virus deaths for the third day running on Thursday, while in Britain — where the Euro semi-final and final take place next week — infections are soaring despite a strong vaccination drive.

There will be a new wave in the WHO European region unless we remain disciplined,” the UN agency’s Europe director Hans Kluge told a press conference.

He warned that the region had seen a 10 percent rise in cases over the past week, “driven by increased mixing, travel, gatherings and easing of social restrictions”.

Asked about whether the Euro championship was potentially acting as a “super-spreader” event, Kluge replied: “I hope not… but this can’t be excluded.”

The coronavirus has killed more than 3.9 million people worldwide, according to an AFP tally.

On Thursday, the European Medicines Agency said two doses of the vaccine appeared to provide protection against the Delta variant, based on real-world evidence.

But while some three billion jabs have been administered worldwide, the global vaccine drive has highlighted stark inequalities between countries, with low-income nations having only given an average of one shot per 100 people.

Vaccine skepticism has also been an issue for many countries including Russia, prompting President Vladimir Putin to urge people on national television to get the jab.

On Thursday, Russia reported 672 deaths over the past 24 hours, setting yet another pandemic high.

Saint Petersburg, which is due to host Spain vs. Switzerland Euro 2020 quarter-final on Friday in front of thousands of spectators, saw the most deaths with 115.

“What we need to look at is around the stadia. How are people getting there? Are they traveling in large crowded convoys of buses? Are they taking individual measures when they are doing that?” Catherine Smallwood, Senior Emergency Officer at WHO Europe, told reporters.

She added that it was also important to look at what was happening after the games, for instance if fans gathered in crowded bars.

“Should this mixing happen, there will be cases.”

The concerning situation in Europe coincides with the launch of an EU-wide Covid certificate meant to ease travel for those living in the 27 member states.

The document — essentially a QR code available on smartphones or on paper — shows whether the bearer is vaccinated with one of the EU’s approved jabs, whether they have recovered from an infection or recently tested negative.

But the surge in the Delta variant could put an abrupt end to this, triggering an “emergency brake” provision suspending the certificate’s acceptance.

Cases are rising fast in many Asian countries too.

Bangladesh locked down completely on Thursday, the army and police patrolling the streets as 168 million people were confined to their homes except for emergencies and to buy essentials.

Many hospitals are struggling, particularly in areas bordering India where the Delta strain was first detected.

Some rural towns have recorded infection rates of 70 percent.

The healthcare system in Indonesia is also overwhelmed by a huge coronavirus wave, which has forced the government to impose emergency restrictions from Saturday.

Malaysia too has announced tighter curbs in some parts of Kuala Lumpur and the neighboring state of Selangor.

Despite the resurgence of the virus and warnings to go slow, many nations are pressing ahead with plans to open up their economies and revive sectors badly hit by the pandemic, especially travel and tourism.

Thailand kicked off its “Phuket sandbox” project on Thursday, under which vaccinated international travelers can visit the holiday hotspot without needing to quarantine.

“After two years of not traveling, I’ve chosen the Phuket sandbox to change my mood,” said 37-year-old Omar Ricalraeesi from the UAE, one of the first passengers to touch down.