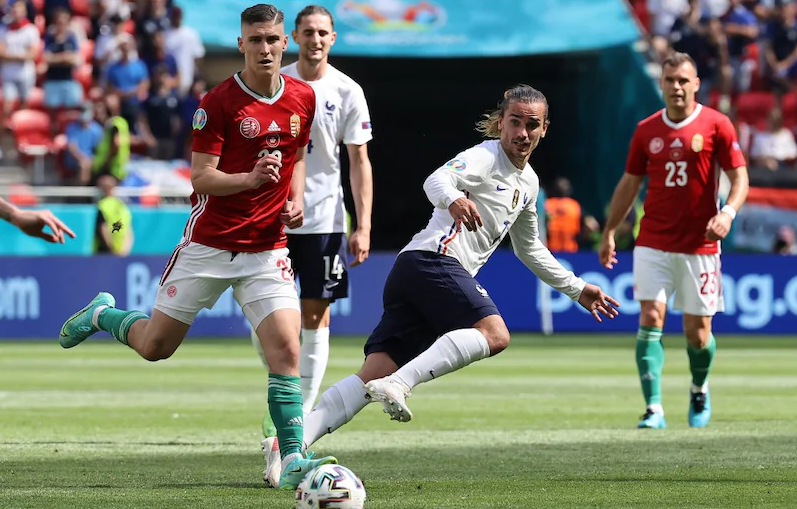 Antoine Griezmann salvaged a 1-1 draw for France against Hungary in Budapest as the world champions missed a chance to clinch a place in the Euro 2020 last 16 on Saturday. Hungary threatened to blow Group F wide open when Attila Fiola gave the hosts a shock lead in first-half stoppage time after catching out the France defence. But Griezmann, the Golden Boot winner at Euro 2016, equalised on 66 minutes as an unconvincing France avoided a first competitive defeat since June 2019.

Didier Deschamps’ side top the section with four points, one above reigning champions Portugal who play Germany in Munich later. Hungary earned their first point and the Germans are bottom after losing to France in their opener.

France stay in Budapest for their final game against Portugal, while Hungary travel to Munich to take on Germany, still hoping to qualify for the knockout phase for a second straight tournament.

Contending with stifling temperatures in excess of 30 degrees Celsius (86 degrees Fahrenheit) and a crowd approaching 60,000 at the Puskas Arena, the only Euro 2020 venue without capacity restrictions due to Covid-19, France controlled much of the first half.

Having lived up to their billing as tournament favourites in a 1-0 win over Germany, France dominated Hungary early on, creating numerous chances against a side that held out for 84 minutes before losing 3-0 to Portugal.

Peter Gulacsi clawed away Karim Benzema’s low drive, reacting sharply to keep out Griezmann’s follow-up, despite the Barcelona star being flagged for offside.

Lucas Digne, brought into the side for Lucas Hernandez as the only change made by France coach Deschamps, then picked out an unmarked Kylian Mbappe whose glancing header flashed narrowly wide.

Hungary lost captain Adam Szalai to injury midway through the first half, and the hosts were living dangerously as Benzema sliced badly from a superb flick by Mbappe before the Paris Saint-Germain forward dragged wide himself.

France captain Hugo Lloris had warned of over confidence against a team expected to finish bottom of the group, and Les Bleus were punished for a brief lapse just before half-time.

Fiola collected Adam Nagy’s crossfield ball and played a one-two with Roland Sallai, outpacing Benjamin Pavard and holding off Raphael Varane to side-foot beyond Lloris at his near post.

Deschamps had waited until the 89th minute before making a substitute in the opener against Germany, but the introduction of Ousmane Dembele for Adrien Rabiot on the hour nearly brought an immediate equaliser as the Barcelona forward rattled the post.

France pulled level when a long kick upfield by Lloris sailed over the head of Nagy, with Mbappe latching onto it ahead of Hungary’s Paris-born Loic Nego.

His ball across goal was deflected into Griezmann’s path by Willi Orban, allowing the forward to slam in his seventh European Championship goal.

Gulacsi produced a fine save to turn away a fierce shot from Mbappe as France pressed for a victory that would have sent them through to the knockout phase. Instead, they must wait until Wednesday’s clash with Portugal.