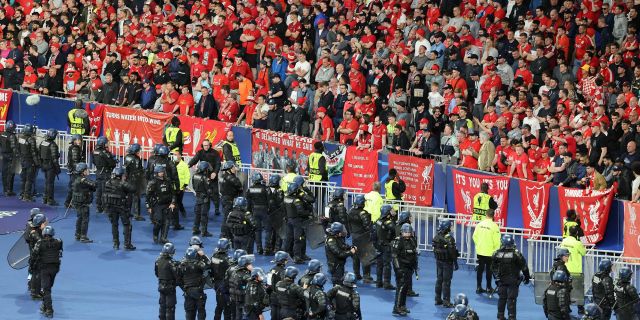 UEFA on Friday apologised to spectators for their “frightening and distressing” experience ahead of the Champions League final, saying no football fan should have to face such scenes. Thousands of supporters were unable to access European club football’s showpiece match between Real Madrid and Liverpool, despite having genuine tickets, in mayhem that saw the French police use tear gas at close range even against children.

“UEFA wishes to sincerely apologise to all spectators who had to experience or witness frightening and distressing events in the build-up to the UEFA Champions League final at the Stade de France on May 28, 2022 in Paris, on a night which should have been a celebration of European club football.

“No football fan should be put in that situation, and it must not happen again,” European football’s governing body said in a statement.

Spanish giants Real Madrid beat England’s Liverpool 1-0, but the match was completely overshadowed by the chaos outside the stadium.

Before the game, thousands of Liverpool fans with tickets had to wait for hours to enter the ground, with French police using tear gas and pepper spray on crowds.

Some Liverpool supporters said they feared being crushed after small openings were used to filter the queues.

Fans from both sides also said they were the victims of crime after the match, with many reporting being assaulted and robbed outside the stadium.

UEFA has commissioned an independent review aimed at finding the shortcoming and responsibilities of those involved in organising the final.

Once completed, it will be published on UEFA’s website.

Asian Cup qualifiers: I’m playing my last games, so FIFA ban on India will be catastrophic, says Sunil Chhetri
“I Don’t Follow The Records, The Records Follow Me”: Cristiano Ronaldo