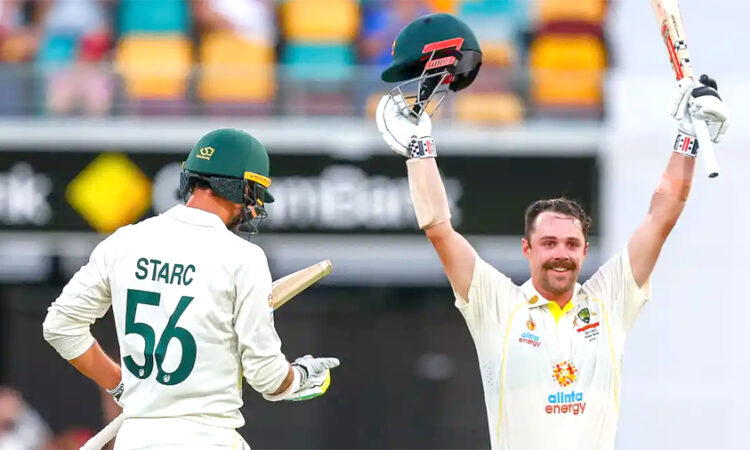 Travis Head blasted a rapid-fire century to crush England hopes on the second day of the opening Ashes Test at the Gabba on Thursday. At the close of play Australia were 343-7, a lead of 196 on England’s dismal first-innings total of 147. Head was on 112 from only 95 balls, alongside Mitchell Starc, who was not-out 10. England had threatened a comeback after tea when Ollie Robinson took two wickets in consecutive balls, but Head’s aggressive innings put paid to any hopes of a miracle recovery. Head came to the crease with Australia 189-3 after Steve Smith edged Mark Wood to keeper Jos Buttler just before tea.

He then watched David Warner (94) and Cameron Green depart to Robinson’s accurate seamers after the break, with Australia still only 89 runs ahead.

But the 27-year-old Head attacked from the outset and was particularly harsh on spinners Jack Leach and Joe Root.

He smashed two sixes and 12 boundaries in his century, his third overall and his first since the Boxing Day Test against New Zealand in 2019.

Leach, 1-95 from 11 overs, failed to assert any control and with Ben Stokes also struggling for fitness, skipper Root had to rely heavily on his three-man seam attack.

Earlier, Warner rode his luck in the first two sessions.

The gritty opener was bowled by a no-ball by Stokes before lunch, then dropped by Rory Burns in the first over after the break, before Haseeb Hameed bungled a simple run-out when Warner was on 60.

Warner’s good fortune began in the opening session when Stokes bowled him when he was on 17, but the all-rounder had overstepped to give the Australian opening batsman a reprieve.

It later transpired that technology issues were at the centre of the no-ball drama.

Television replays showed that Stokes had also overstepped on the first three balls of his over, but nothing was called.

That led to suggestions that had he been called earlier by the umpires, he would have adjusted his run-up and Warner’s prized wicket — on Stokes’s fourth delivery — may have stood.

Cricket Australia later said the technology that TV umpires use to help check no-balls was not working.

England needed to take all their chances to keep their hopes of salvaging anything from the first Test after their disastrous start on Wednesday, when they were bowled out in just 50.1 calamitous overs.

They started well when Robinson claimed his first Ashes wicket, Marcus Harris, with the score on 10.

England had gone into the Test without veteran seamers Jimmy Anderson and Stuart Broad, surprising many, including Australian captain Pat Cummins.

But the seam attack of Robinson, Chris Woakes and the outright pace of Wood were able to keep the Australian batters pinned down early on with some tight and accurate bowling.

Robinson was particularly dangerous and made the breakthrough when he enticed Harris to play forward to a ball that left him slightly, the Australian opener edging to second slip, where Dawid Malan took a good low catch.

Warner and Marnus Labuschagne consolidated but late in the second session Labuschagne sliced an attempted cut off Leach to Wood at backward point to fall for 74.

Soon after Wood, who bowled with real pace all day, gave England some cheer when he removed the dangerous Smith — so often England’s tormentor — in the penultimate over of the second session.

When Warner slapped a short Robinson ball to Stokes at short cover after tea and then Green shouldered arms and was bowled next ball, England must have had some belief.

But that was soon quashed by Head’s swashbuckling innings.