Tokyo Olympics: Unbelievable when we lose, says Rapinoe after USWNT’s loss to Sweden 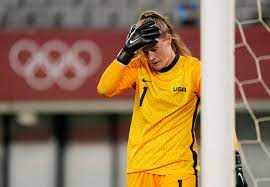 While the four-time World Cup-winning United States may have once appeared untouchable, Wednesday’s 3-0 loss to Sweden is a reminder that there are several title threats at the Tokyo Olympics, veteran forward Megan Rapinoe said.

The Americans’ bid to pick up a fifth Olympic gold got off to a rocky start on Wednesday, as their 44-game unbeaten streak ended in their 2020 Olympic opener at Tokyo Stadium.

The 36-year-old Californian said it was a reminder of just how strong the women’s game is.

“Sometimes I feel like if ever we lose or tie or anyone gives us a game, it’s like ‘unbelievable’ and that’s really kind of offensive to every other team,” the 2012 gold medallist told reporters after the match.

“This is the highest level and (these are) the best teams in the world – Sweden being one of the best teams ever, in the world, certainly in Europe. So, you know, if we don’t play well game in, game out, we’re not going to win these games,” Rapinoe added.

The U.S. had hoped to exact revenge after the Swedes knocked them out of the 2016 Games in the quarter-finals but must instead shake off disappointment as they prepare to face New Zealand on Saturday, with a grinding Olympic schedule leaving little time for rest and reflection.

“I can’t remember the last time we gave up a goal so to give up three is not great but we know what we need to do, to win these games, get out of the group and go from there,” said Rapinoe.