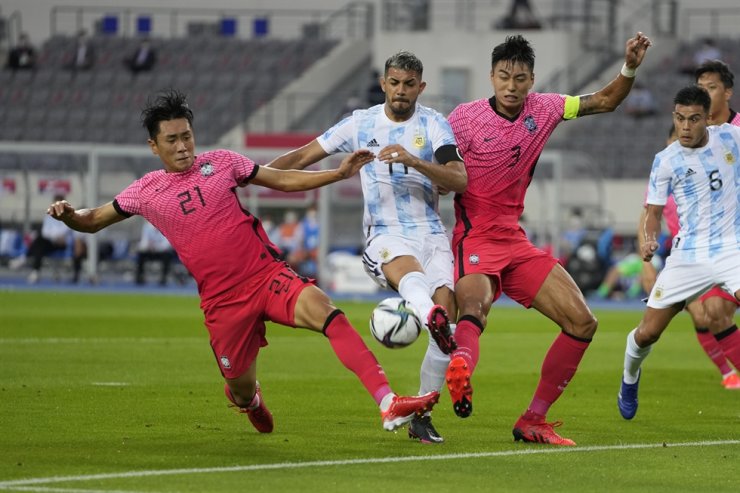 The South Korean Olympic football squad drew 2-2 against Argentina on Tuesday after it netted an injury-time equaliser in a friendly match in front of empty seats.

The match held in Yongin, south of Seoul, was one of two tune-up matches this week ahead of the Tokyo Olympics set to begin next week.

It was played without spectators under tightened coronavirus restrictions as a recent surge in infections grips the greater Seoul area.

Argentina went ahead early when Alexis Mac Allister scored from just outside the box in the 12th minute to give his side a 1-0 lead.

But South Korea caught up in the 35th minute with midfielder Lee Dong-gyeong’s long-range strike hitting the back of the Argentine net.

The visiting team took the lead again 12 minutes into the second half when Carlos Valenzuela made a curling shot into the far corner after receiving a cross.

The home team then generated a last-minute turnaround when winger Um Won-sang delivered an equaliser in the 92nd minute.

South Korea will play France on Friday in the last preparation match before heading to Japan, where it will start its quest for a second Olympic medal against New Zealand on July 22.

Romania and Honduras are also in Group B while Argentina will face Egypt, Spain and Australia in Group C.

The top two teams from each of the four groups will advance to the quarter-finals.