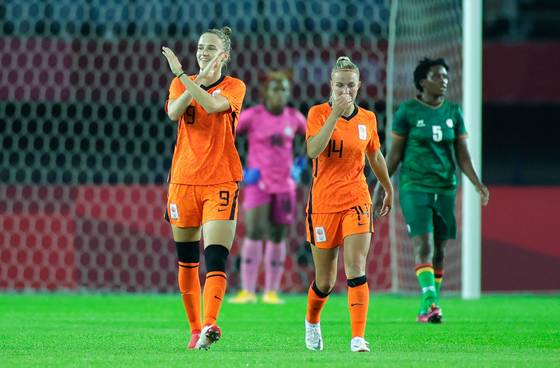 Here are the results from the opening fixtures of women’s football in the Tokyo Olympics:

Stina Blackstenius scored a pair of goals and Sweden once again stunned the United States at the Olympics with a 3-0 victory on Wednesday in the women’s soccer tournament.

The Americans, ranked No. 1 in the world and the favourites to win gold in Tokyo, were riding a 44-match unbeaten streak heading into the match.

But Sweden, ranked No. 5, has been the U.S. team’s nemesis of sorts in recent years. The Swedes bounced the Americans from the 2016 Rio de Janeiro Games in the quarterfinals, the earliest U.S. Olympic exit ever.

Then in April, Sweden played the United States to a 1-1 draw in Stockholm, which snapped a winning streak dating back to January 2019, when the Americans lost to France in the run-up to the World Cup.

Blackstenius’ header into the far corner off a cross from Sofia Jakobsson in the 26th minute gave Sweden the first-half lead.

The United States came out stale, with its best chance of the opening half coming in the final moments when Rose Lavelle’s shot hit the post. Coach Vlatko Andonovski made changes for the second half, subbing in Carli Lloyd for Alex Morgan and Julie Ertz for Sam Mewis.

But Blackstenius scored again in the 54th minute, beating goalkeeper Alyssa Naeher, as the Americans continued to struggle. Lina Hurtig then scored in the 72nd.

The loss was the first for the United States under Andonovski, who took over when former coach Jill Ellis stepped down following the team’s World Cup victory in France.

The Swedes were without Magda Eriksson because of injury. The team said she has been training, but because of the compact schedule of the tournament she was held out of the opener.

Tokyo is Sweden’s seventh Olympics. After eliminating the Americans on penalties in the quarterfinals five years ago, the Swedes went on to win the silver medal, losing to Germany 2-1 in the final.

The United States has four Olympic gold medals, more than any other nation. The team is vying to become the first to win Olympic gold following a World Cup title.

Sweden now leads Group G heading into Saturday’s game against Australia in Saitama, while the United States faces New Zealand. The top two teams in the group advance the knockout round. Ellen White scored a pair of goals and Britain opened the Olympic women’s football tournament with a 2-0 victory over Chile on Wednesday.

Lauren Hemp’s header put the ball in front of White for a close-in goal in the 18th minute. White’s second goal was a volley to the far post in the 75th.

Chile, ranked No. 37 in the world, was making its Olympic debut. Known as La Roja, Chile qualified for Tokyo by beating Cameroon 2-1 in a two-legged intercontinental playoff.

Britain’s roster for Tokyo is composed mostly of English players, but Kim Little and Caroline Weir are from Scotland and Sophia Ingle is from Wales.

Because British Olympic teams include Scotland, Wales, England and Northern Ireland, all four must be in agreement to participate. The only other Olympics that has included a British team was London in 2012.

England, ranked No. 6, was among the top three UEFA finishers at the 2019 World Cup, which earned Britain its spot.

Marta finished with a pair of goals for Brazil, which is ranked No. 7 in the world. Debinha, Andressa Alves and Beatriz also scored.

A six-time FIFA Player of the Year, Marta has 111 international goals, more than any Brazilian player, male or female. After her goal in the ninth minute, Debinha added another in the 22nd to put Brazil up 2-0.

Marta added her second goal in the 74th minute before Alves scored from the penalty spot. Beatriz closed out the rout with a goal in the 89th.

🇧🇷 Marta becomes the 1st player to score at 5 #OlympicFootball Tournaments and then gives up the chance to net a hat-trick to allow Andressa Alves to take a penalty. What an amazing player and person 💛@SelecaoFeminina | #Tokyo2020 pic.twitter.com/9FE1yVODo3

Brazil was playing its first major tournament under Pia Sundhage, the former coach of both the U.S. and Swedish women. Sundhage coached the U.S. team that won the gold medal at the 2012 London Games.

China, ranked No. 15, qualified as runner-up at the Asian qualifying tournament. The Chinese were making their fifth Olympic appearance. The team’s best finish was runner-up in 1996.

China’s squad for Tokyo is largely inexperienced, with only five players left over from the roster for the 2016 Games.

Mana Iwabuchi scored in the 84th minute and Japan pulled into a 1-1 draw with Canada on Wednesday.

Christine Sinclair, the all-time leading international scorer among men and women, scored her 187th career goal in the sixth minute to give the Canadians the early lead. It came in her 300th appearance with the team.

Iwabuchi answered late with a long strike that caught Canada goalkeeper Stephanie Labbe out of position.

The Tokyo Games are Canada’s fourth Olympics. The team has won bronze medals in the last two.

Sinclair has played in all four appearances, scoring 12 goals in 15 games — including the game-winner against Brazil in the third-place match in 2016.

The Canadians are playing under coach Bev Priestman, who took over when Kenneth Heiner-Moller stepped down last June.

Japan, which qualified as hosts, did not make the field for Rio de Janeiro in 2016. Known as the Nadeshiko, Japan won silver at the 2012 London Games.

Sam Kerr and Tameka Yallop both scored and Australia opened its Olympic campaign with a 2-1 victory over New Zealand on Wednesday.

Yallop scored in the 20th minute and Kerr added her goal in the 33rd to put the Matildas up before halftime. Australia, ranked No. 9 in the world, is playing in its fifth Olympics.

Australia has advanced to the Olympic quarterfinals twice, including at the 2016 Games. Fourteen players from that team are on the Tokyo squad.

This is New Zealand’s fourth Olympics. The Ferns are led by Tom Sermanni, the former coach of Australia and the U.S. national team.

New Zealand’s best Olympic showing was a quarterfinals appearance in 2012. Miedema, the all-time leading scorer in the Women’s Super League, as well as the top career scorer for the Netherlands, had goals in the ninth, 15th, 29th and 59th minutes.

Lieke Martens added two goals for the fourth-ranked Netherlands, which advanced to the World Cup final two years ago in France but fell to the United States. The Tokyo Games are the Netherlands’ first Olympics.

Barbra Banda scored all three goals for Zambia, the lowest ranked team in the field at No. 104.

Netherlands coach Sarina Wiegman is stepping down after the Olympics to lead England in the next World Cup cycle. Wiegman will be replaced by Portland Thorns coach Mark Parsons at the conclusion of the National Women’s Soccer League season.

This is also Zambia’s first appearance in the Olympics. Known as the Copper Queens, Zambia had played just once this year, a friendly with South Africa. The team’s scheduled tune-up match with Britain ahead of Tokyo was called off because of COVID-19 restrictions.

Serie A: Spezia reports 15 confirm cases of COVID-19 ahead of upcoming season
Tokyo Olympics: Unbelievable when we lose, says Rapinoe after USWNT’s loss to Sweden