‘This is for that guy who messaged me’: Deepak Chahar answers social media critic who asked him ‘not to play’ vs PBKS. 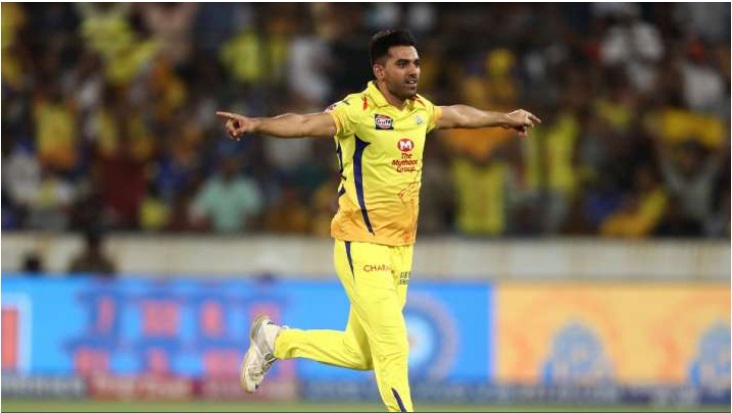 IPL 2021: After his match-winning 4 overs 4 for 13, Deepak Chahar, in a chat with CSK teammate Shardul Thakur, revealed how a fan had asked him not to play the match against PBKS on social media. The CSK pacer said ‘this performance was for that guy who had messaged him.

Deepak Chahar dedicated his Player of the performance against Punjab Kings in IPL 2021 match No. 8 in Mumbai to a social media critic who had asked him ‘not to play this match following an average show in Chennai Super Kings’ (CSK) opening match of Indian Premier League against Delhi Capitals.

Chahar produced a match-winning performance by picking up the wickets of Mayank Agarwal, Chris Gayle, Deepak Hooda, and Nicholas Pooran to break the backbone of the PBKS batting line-up on Friday.

After his 4 overs 4 for 13, Chahar, in a chat with CSK teammate Shardul Thakur, revealed how a fan had asked him not to play the match against PBKS on social media.

“I was watching social media after reaching my room. A boy had texted me saying, ‘Bhai AAP bohot ache bowler ho but ek request hai — agla match mat khelna’ (You are a good bowler but I request you to not play the next match),” Chahar said after the match in a video posted by IPL.

The right-arm seamer said his performance was for that guy who had messaged him after the previous game.

“Expectations are very high and performing in every match is important. So, this is for that guy who messaged me. This performance would not have come if I was not playing. Don’t declare a player bad on the basis of his one performance. Please support them,” he added

“Looking at today’s wicket and today’s performance, I must say that Wankhede is my favorite ground because you get help in the starting (from the pitch),” Chahar told IPL’s official website.

After an indifferent last season, Chahar is satisfied as he looked in fine rhythm with Dhoni bowling him out within the first 10 overs.

“It was a good feeling. It (the spell) came at an important time as we needed to win this game. “It was thus necessary to provide a good start and this was an important match for us and I am very happy that I could contribute to the team’s win,” Chahar said

The seamer said that there are always multiple plans in place but always the primary strategy is to get some swing and off the pitch movement first up.

“After the first few matches were high-scoring, there were a lot of meetings about what I needed to do in this particular over and set the field accordingly. “But in the last game, I got a bit of support. But today (on Friday night) plan B, C wasn’t needed, and plan A worked. So the meetings that we had might help us in the upcoming matches,” he said.