“The Noise Has To Be So Huge…”: Virat Kohli’s Welcome Plan For Lord’s Heroes Mohammed Shami And Jasprit Bumrah 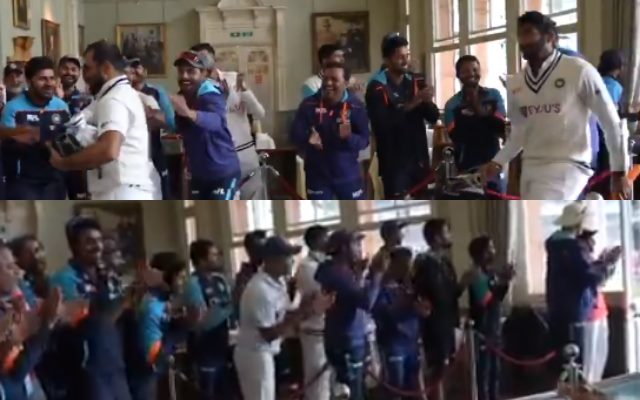 India scripted a memorable win at Lord’s in the second Test of the ongoing five-match series against England last week. Reminiscing the victory, fielding coach R Sridhar sat down for a chat with ace off-spinner Ravichandran Ashwin on the latter’s YouTube channel. In the video, speaking about the partnership between Jasprit Bumrah and Mohammed Shami, Sridhar shared an anecdote from Day 5 of the Lord’s Test. Sridhar told Ashwin that when Shami and Bumrah were making their way to the dressing room at Lunch break, Kohli asked the whole team to cheer and welcome the duo by creating noise that “reverberates in Lord’s for years to come”.

“When we realized they were going to come in at lunch, Virat came and said: Everyone of us is going down to cheer and welcome the boys. The noise has to be so huge that it has to reverberate in Lord’s for years to come,” Royal Challengers Bangalore quoted R Sridhar as saying on Ashwin’s YouTube show.

In the match, India had lost the wickets of Rishabh Pant and Ishant Sharma early on the final day.Shami and Bumrah then put on an unbeaten 50-plus (89) stand for the ninth wicket.

Having set England a target of 272 runs, Indian bowlers clicked in unison to bundle out the hosts for 120 and secured a 151-run win.

With the win at Lord’s, India took 1-0 lead in the five-match Test series with three games to play.Both teams will face off at Headingley in Leeds in the third Test match, starting on Wednesday.