Tennis Royale: US Open champ Emma Raducanu on court with Kate Middleton, but splits with her long-time coach 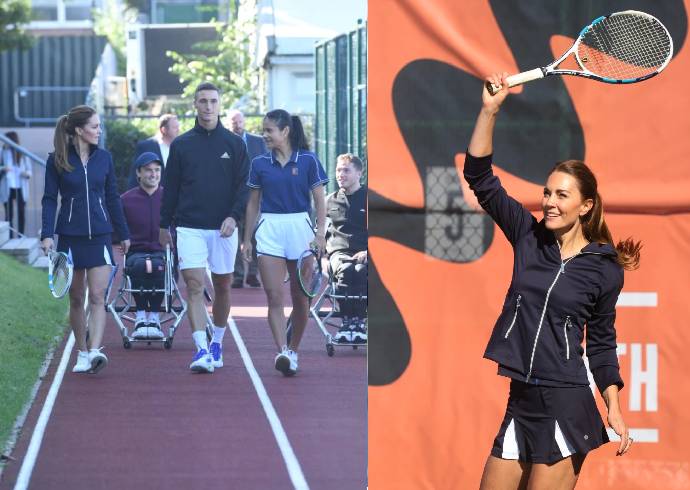 Tennis Royale – Emma Raducanu Kate Middleton: US Open champion Emma Raducanu was up for Royal treat on Friday as she hit the court with the Duchess of Cambridge Kate Middleton. But off the court, Raducan made one of the big decision of her career – i.e to split with her long time coach, the coach who guided her to a first major title at the US Open.

Tennis Royale – Emma Raducanu Kate Middleton: Raducanu & Middleton put up a Royal Show as they battled out on court for 30 Minutes. The 18-year-old hailed the duchess’ “great forehand”. The Duchess of Cambridge gave Raducanu a smashing homecoming party at the National Tennis Centre in Roehampton as the youngster became the first British woman to win a Grand Slam Singles title since 1977.

Kate, the Patron of the Lawn Tennis Association, played Raducanu in a friendly doubles match.

The teenager said: “We were just speaking about the US Open and the win and what a great achievement it was for us but also for the country.

“She was very supportive and it was great to play tennis with her.

“She has a great game and actually a great forehand.”

Tennis Royale: US Open champ Emma Raducanu on court with Kate Middleton, but splits with her long-time coach

British number one Emma Raducanu has split with the coach who guided her to a first major title at the US Open. Andrew Richardson was hired for the summer tournaments in the United States, which ended with the 18-year-old’s improbable victory in New York.

Raducanu had entered the tournament as a qualifier, and the world number 150.

“At this stage of my career I really need someone that has had that WTA Tour experience at that high level,” she explained.

“Especially right now as I’m so new to it, I think I really need someone just to guide me who has already been through that themselves.

“Never did I even dream of winning the US Open and now I’m ranked 22 in the world, which is pretty crazy to me.”

It is not clear who Raducanu camp will hire in the coming days as her next coach.