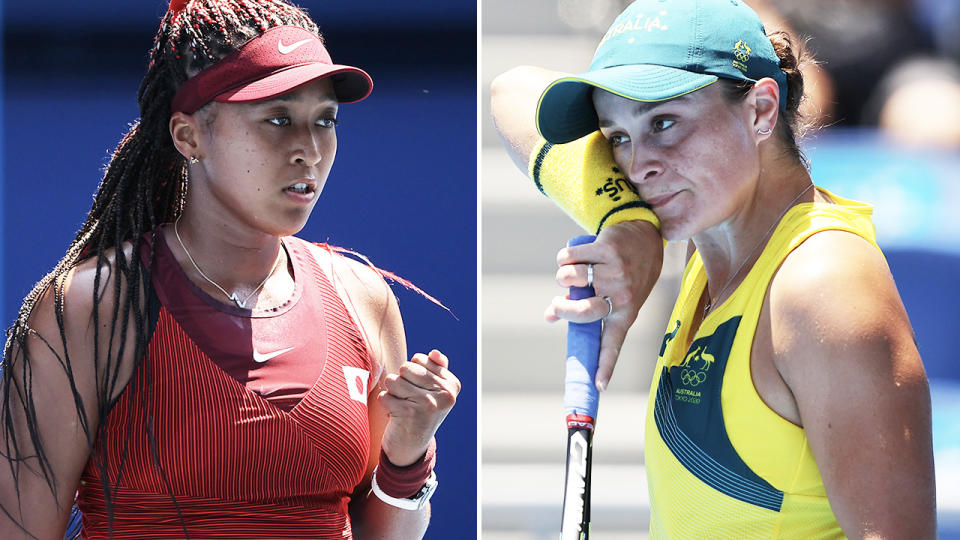 Tennis fans were left disappointed on Wednesday when Naomi Osaka joined Ash Barty in skipping a key lead-up event ahead of this month’s US Open.

Organisers of the National Bank Open hard-court event in Montreal announced that Osaka had pulled out on Wednesday.

The tournament announced the withdrawals of Osaka, as well as Sofia Kenin and Iga Swiatek – two other top-10 players who have won grand slam titles.

World No.1 Barty was also absent when the official entry list was announced last week, as was 23-time grand slam champion Serena Williams.

Osaka is coming off a third-round loss at the Tokyo Olympics, where she had the honour of lighting the cauldron during the opening ceremony.

Before that, the 23-year-old had not competed anywhere since withdrawing before her second-round match at the French Open, citing the need for a mental health break.

She also sat out Wimbledon entirely, watching on as Barty won her second grand slam title and extended her lead atop the world rankings.

“I’m sorry to be missing out on Montreal this year,” Osaka said. “I hope to see you all in Canada next year.”

Barty missed out on a medal in the singles and women’s doubles, but managed to claim bronze with John Peers in the mixed doubles.

Osaka is currently ranked No.2 and is the owner of four major championships, all on hard courts, including this year’s Australian Open.

The fourth-ranked Kenin, who won the 2020 Australian Open, has been sidelined by a foot injury since Wimbledon.

World No.8 Swiatek, last year’s French Open champion, lost in the second round of the Olympics.

Fans were left disappointed by the spate of withdrawals.

The event is missing some serious star power, with men’s World No.1 Novak Djokovic also opting out.

Just hours before his opening match at the Tokyo Olympics, Tennis Canada confirmed Djokovic’s withdrawal from the hard-court event.

Organisers alluded to Djokovic’s hectic schedule for the withdrawal, which included the Olympics and his pursuit of a calendar year ‘Golden Slam’.

The World No.1 was bidding to join Steffi Graf as the only players in tennis history to win all four majors and an Olympic gold medal in the same year.

However his quest ended in heartbreak when he lost to Alexander Zverev in the semi-finals, before missing out on a medal completely in the match for bronze against Pablo Carreno Busta.

“It would have been fantastic to have hosted Novak,” Karl Hale, tournament director National Bank Open, said in a news release.

“However, following a great run to his record-equaling 20th grand slam title at Wimbledon and his participation at the Olympic Games in Tokyo, we understand his decision.

“We wish him all the very best for the rest of the season.”

The National Bank Open begins on August 9, while the US Open – the year’s last major championship – starts on August 30 in New York.