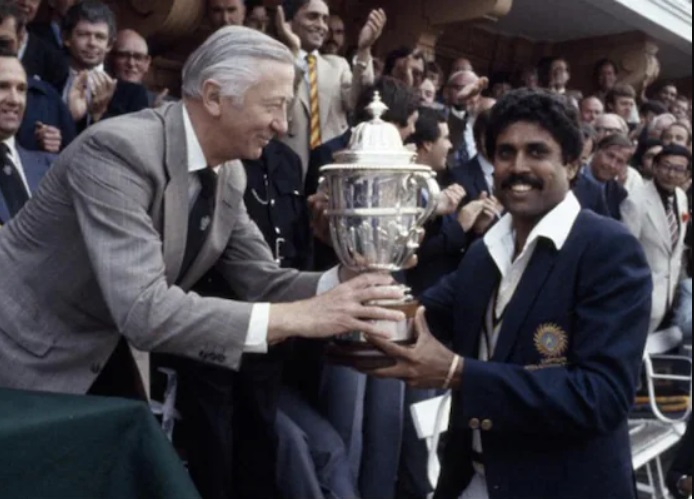 Former captain Kapil Dev led the Indian team to the Prudential World Cup on this day, 38 years ago in 1983 when they defeated the West Indies by 43 runs at Lord’s in England. India’s first of two 50-over World Cup wins, with former Indian captain MS Dhoni securing the second in 2011. Remembering the occasion, the official BCCI Twitter handle on Friday posted a picture of the former all-rounder lifting the World Cup and wrote, “#OnThisDay in 1983: A historic day for the Indian cricket as the @therealkapildev-led #TeamIndia lifted the World Cup Trophy.”

Considered as one of India’s finest achievements on a cricketing field, Team India came out victorious against a mighty West Indian side consisting of the likes of Joel Garner, Andy Roberts, Vivian Richards, skipper Clive Lloyd among others.

Having lost the toss, India had to dig deep to post 183 runs in 54.4 overs. Kris Srikkanth, Mohinder Amarnath and Sandeep Patil rose to the occasion and batted courageously against a dangerous bowling attack.

#OnThisDay in 1983: A historic day for the Indian cricket as the @therealkapildev-led #TeamIndia lifted the World Cup Trophy. 🏆 👏 pic.twitter.com/YXoyLyc5rO

In reply, only Viv Richards and Jeff Dujon could get going as India bowled impressively while defending a low total.Madan Lal and Amarnath bagged three wickets each to help India win by 43 runs as the West Indies folded at 140 runs in 52 overs.

Amarnath was picked as the man-of-the-match after his exceptional all-round display.

There's just so much pride that we as Indians feel each time we look at this image 💙🇮🇳#OnThisDay in 1983, @therealkapildev and his #TeamIndia earned a special place in cricketing history with a World Cup triumph at Lord's 🏆 pic.twitter.com/T23bPP1tY8

While Mumbai Indians (MI) also shared a picture with a caption that said, “Where it all started… #OnThisDay in 1983, @therealkapildev’s team did the impossible and lifted the first-ever Cricket World Cup for India! #OneFamily #MumbaiIndians @BCCI.”