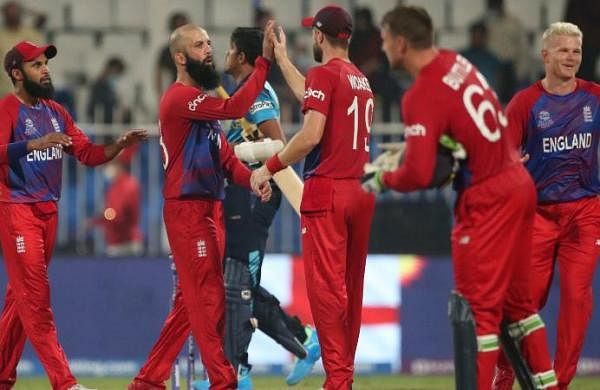 A semifinal spot virtually assured, in-form England would look to dent South Africa’s hopes of reaching the last-four stage when the two teams meet each other in a high-voltage Group 1 Super 12 match of the ICC T20 World Cup in Sharjah on Saturday. With a net run rate of +3.183, England are more or less through to the semifinals with four wins from as many games, while South Africa are lying in the third spot with six points from four matches. Both South Africa and Australia are in close race for the second semifinal spot from Group 1 but the Australians are above the Proteas on the basis of a better net run rate, though they have six points each.

It will all boil down to Saturday’s game and South Africa will know what exactly they need to do before facing England as Australia play West Indies in the first match of the day.

The Proteas can’t afford to slip even a bit and need a resounding win to keep their hopes alive. But with form on their side, an ominous-looking England will definitely start as firm favourites against the Proteas.

After three consecutive wins over Bangladesh, Sri Lanka and West Indies, South Africa suffered their first defeat against Australia in their last match, putting questions on their campaign.

England would look to capitalise on it and finish off their group campaign with a perfect record.

They have more or less ticked all boxes in their campaign so far. England looked one of the best teams in the tournament other than Pakistan.

While it hasn’t been a cakewalk in all the four matches, the Englishmen were clinical in their approach and somebody or the other stepped out to bail the team out whenever in trouble.

In fact, Buttler achieved two personal milestones in the last match — scored his maiden T20 century (101 not out of 67 balls) and also became the only English cricketer to hit centuries in all formats of the game.

And come Saturday, the opener would be high on confidence to do an encore. Another good news for England is that skipper Morgan struck form in the last match, scoring 40 off 36 balls and shared 112 runs with Buttler.

On the bowling front, the spin duo of Moeen Ali and Adil Rashid have been excellent so far, while Chris Woakes, Chris Jordan and Liam Livingstone have responded well to the team’s call in the pace department.

However, England will miss the services of left-arm pacer Tymal Mills as he has been ruled out of the tournament due to a right thigh strain suffered in their last match.

Even though they managed to win three matches on the trot, South Africa’s campaign have been far from impressive.

They wilted under pressure against a quality side like Australia and Temba Bavuma’s team ill-affords to repeat the mistake against England.

South Africa’s fate entirely doesn’t lie in their own hands. The Proteas need to win by a big margin against England to go over Australia on NRR or hope West Indies beat Australia by a margin that reduces Australia’s NRR.

South Africa will depend on Quinton de Kock, Aiden Markram, Rassie van der Dussen, Temba Bavuma and David Miller to deliver the goods in the batting department, while the bowling unit will be led by top-ranked T20 bowler Tabraiz Shamsi with the likes of Anrich Nortje and Dwaine Pretorious in support.