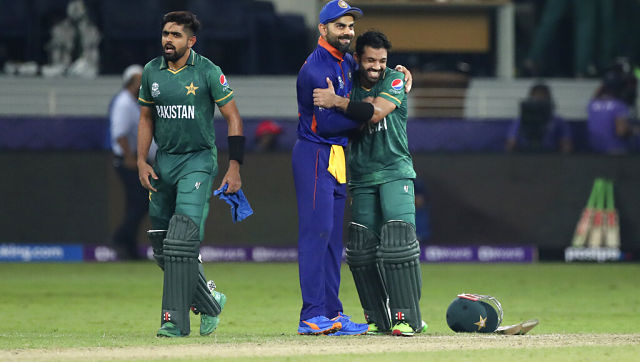 Babar Azam and Mohammad Rizwan sprint back for the second run, Pakistan have beaten India for the first time in a cricket World Cup, be it T20Is or ODIs. It is a resounding win, as resounding as Shaheen Shah Afridi’s leg before appeal on Rohit Sharma in the first over of the match. It is a win that is being rejoiced all over Pakistan. People are out in the streets with Pakistan flags, Babar Azam’s father is in tears at the stadium.

There are people on bikes, on cars, on foot out in the streets singing ‘Dil Dil Pakistan’. The moment that has eluded Pakistan cricket for an eternity is finally here. This means more to some people in the country than winning the tournament itself. There are even fireworks going on somewhere. This victory means so much to the people of Pakistan, it can’t be rationalised in words, especially for people who have sat through all those World Cup defeats.

This wasn’t expected by many in Pakistan, this was supposed to be another easy win for India. Pakistan’s former cricketers and celebrities didn’t rate this generation of cricketers much. No other generation of Pakistan cricketers has come under as much scrutiny.

From a former fast bowling great saying Shaheen Shah Afridi doesn’t have enough aggression to represent Pakistan, to Babar Azam being labelled selfish, this generation of cricketers has been subjected to more trolling than any in the past.

Shadab Khan, who has more T20I wickets since his debut than any other bowler has been called a ‘fraud.’ Hassan Ali, Player of the Tournament in the 2017 Champions Trophy, was labelled a ‘fluke’ by former skipper Amir Sohail. Mohammad Rizwan, ranked seven among T20I batters,  was not considered good enough for the format by past selectors. The list goes on.

This generation has been subjected to hate and trolling by everyone ranging from political figures to celebrities to former cricketers and yet it is this generation that has finally broken the World Cup jinx. Pakistan beat India by 10 wickets for their first World Cup win over neighbours in 13 attempts. AP

Going into this World Cup, there was a lot of debate over the squad. General emotion in Pakistan was that these guys were not good enough and the squad wasn’t skilled enough to compete with the likes of India, England and the rest. Up until the last day there were requests from former cricketers to change the squad. Everyone seemed to be ignoring the fact that this very team had, not long ago, gone on a streak of 11 T20I series without defeat. Most of those wins had come in the UAE, these players had honed their skills playing the PSL in the UAE and the World Cup was scheduled to be in the UAE. For anyone who looked at these facts, Pakistan would easily be the favourites to reach the semi-finals but such is the cricket culture in Pakistan that self-loathing and criticising your team is a thing you must do to stay relevant.

To add to the unnecessary criticism and the incomprehensible pressure of a Pakistan-India match, cricket in the country descended into complete chaos over planned home season against New Zealand and England. New Zealand pulled out on the day of the first ODI. England cancelled their tour citing ‘fatigue’. It resulted in massive outrage among fans and administrators alike. Pakistan had toured England twice during the pandemic and had saved their home summer of international cricket. Pakistan had backed New Zealand, supported them, stayed on tour on New Zealand despite reasons to pull out. Hence everyone in Pakistan cricket felt betrayed. All these grievances and anger were being projected on the players through no choice of their own. They were ‘instructed’ to win at all costs versus India and New Zealand — as revenge. There were reports of a blank cheque offer by a Karachi businessman if Pakistan beat India. All this meant players were put under even more pressure.

If that wasn’t enough, Pakistan decided to change the board chairman. As soon as Ramiz Raja’s appointment became inevitable, change was already in motion. On the day Pakistan’s T20 World Cup squad was announced, head coach Misbah Ul Haq and bowling coach Waqar Younis resigned. Official statement cited ‘personal reasons’ for the exit but later while speaking to A-Sports, Misbah and Waqar said they weren’t happy because the squad was announced without their consultation. Rumours started circulating that Babar Azam was unhappy with the squad. Eventually he got his way and changes were made.

Amid all this chaos, Pakistan players rose to the occasion, united by isolation, united by pressure, not by design but by accident. Laws of the universe and physics dictate that entropy is inevitable, which means chaos and randomness are two certainties. From particles to massive objects to conscious beings, chaos represents disaster. For the Pakistan cricket team it represents order. That sounds like an absurd statement however there is enough data to back that up. In the 1992 World Cup, there was an alleged revolt against the then captain, and now Prime Minister, Imran Khan. Pakistan ended up winning the tournament.

Ahead of the 1999 World Cup, Pakistan’s head coach Javed Miandad resigned less than a month before the tournament and the team made the final. On the eve of the 2009 T20 World Cup, chief selector Abdul Qadir resigned while captain Younis Khan said T20 cricket “was a bit of fun” and Pakistan won the World Cup. In the 2017 Champions Trophy, the team were thrown into complete disarray after their defeat to India, but ended up winning the tournament. Hence when New Zealand pulled out, England refused to tour and the head coach resigned, historical evidence suggested Pakistan would either have another great tournament or break the jinx versus India or end up doing both. Pakistan cricket is the anti-matter to matter, it exists in a parallel universe where different laws of physics and universe apply.

Despite the win, despite all the celebrations across the country, this generation still has to play its “revenge” match vs New Zealand. They will have no respite and if they fail, the knives will be out again. They are used to it by now, some have become immune while others have learnt to ignore but all of them have learnt that the only way for them to thrive is to trust each other and enjoy each other’s success.