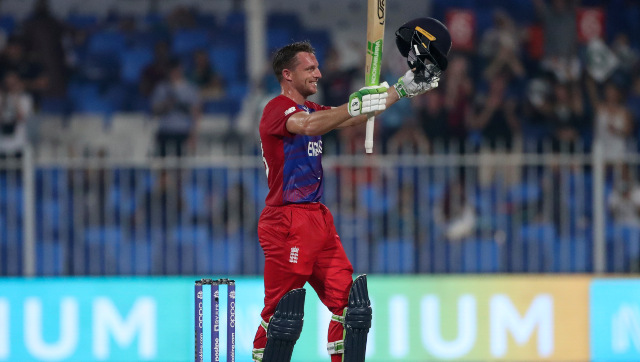 Not without reason are England the most complete, versatile, feared outfit in limited-overs cricket. Anyone who watched their conquest of Sri Lanka on Monday night will know exactly why.

It was their first taste in the T20 World Cup of the Sharjah strip, similar in character to surfaces in Dubai and Abu Dhabi except for the pronouncedly low bounce they aren’t accustomed to. It was the first time Eoin Morgan lost the toss and England had to set the pace. It was also the first time they found themselves in a hole, 47 for three at the end of 10 overs.

Sri Lanka weren’t unjustified in believing, a fourth of the way into their Group 1 clash, that they had the measure of England. That was about as good as it got for the 2014 champions.

Seldom in the last few years have England had to rely on heroics from one individual to bail them out of trouble, such is the firepower in their battingand variety and depth in their bowling. Monday was one of the exceptions; a cape-less superhero answering to the name of Jos Buttler rode to their rescue with the most remarkable innings of the tournament.

In England’s annihilation of Australia a couple of nights back in Dubai, the opener was at his marauding best. An unfettered exhibition of ball-striking in the quest for 126 culminated in Buttler finishing unconquered on 71, off a mere 32 deliveries.

Sharjah required Buttler to bat differently. England attempted to make light of the non-existent bounce by sticking to their aggressive guns but in no time, they found themselves staring down the barrel. Jason Roy, Dawid Malan and Jonny Bairstow perished inside the Powerplay, during and after which Sri Lanka’s outstanding spinners Maheesh Theekshana and Wanindu Hasaranga tightened the screws by fusing economy with penetration.

In so many ways, the first half of England’s innings mirrored India’s against New Zealand on Sunday. That’s where the similarity ended. It was breathtaking stuff, yet Buttler himself was never out of breath. AP

Virat Kohli fell to the first ball after the recently introduced drinks break at the halfway stage of the innings, attempting an uncharacteristic hoick from outside off, against the leg-spin of Ish Sodhi, to hole out to long-on. It was the ultimate indication that the pressure of a stuttering score board had got to the Indian skipper. Buttler punched the first ball on resumption on the up through extra-cover in a classic example of lack of premeditation. Those two strokes spoke to the state of mind of the batsmen involved, to their current levels of confidence and self-belief, to their trust in their games and in their own ability to pull them off.

England’s effort of 163 for four was an innings of three parts. In the first, they were typically gung-ho, with potentially disastrous consequences. After the abortive Powerplay which only fetched them 36, Buttler and Morgan focused on self-preservation; overs seven through 10 yielded just 11, at 2.75 an over.

If there was a time to panic, it was now. If England didn’t, it was because they invoked the smarts to go with their intent.

Their awareness of what lay in store aided England in their decision-making. Notwithstanding the brilliance of Sri Lanka’s spinners, who between them went for just 34 runs in eight overs – leggie Hasaranga also picked up three wickets – England realised the odds were stacked in their favour. In the second half of their innings, England would encounter pace 70 percent of the time. That would be when they would launch themselves.

Buttler had been forced to curb his natural instincts in the first 10 overs. In the same number of balls in which he smashed 71 against Australia, he was only 30, after 32 deliveries. If he was frustrated, it expressed itself through sheepish smiles and nonchalant shrugs of the shoulders. After all, he knew that once he opened those shoulders, no ground in the world was big enough.

Once Buttler decided it was tee-off time, there was only one winner. He breezed from 30 to 50 in 13 deliveries, merely the appetiser before the main course. 50 to 100 was traversed in a ridiculous 22 balls, the last of which was deposited way over square-leg for a sixth six that catapulted him to his maiden T20I hundred. It was breathtaking stuff, yet the batsman himself was never out of breath. What might have seemed spectacular to others was the result of exceptional situational and tactical awareness by Buttler.

Against spin, he made just 12 off 24. Potentially debilitating in T20 cricket, but not when you can lash 89 off 43 deliveries from pace. Sri Lanka’s quicks were willing to play ball – even though hitting the good length was the optimal option, they were put off by the occasional risk Buttler was willing to take by shimmying down the track. Overcompensating by bowling too full, they were taken apart by the opener. And Morgan.

The captain came into this game wondering where his next run would come from. For 20 deliveries, he scratched around, batting from a rapidly fading memory, until a gift of a full toss from Hasaranga flicked on a switch. From 9 off 20, he finished with 40 off 36, clearly the junior partner in the stand of 112 with Buttler but no less influential in the denouement.

The dew started to settle in by the end of the England innings and Sri Lanka fancied their chances of a dart at 164. England were unfazed; they were also undaunted when left-arm paceman Tymal Mills hobbled off with a quad injury. They shouldn’t have been, because these aren’t conditions they’ve encountered often. But they knew where they were coming from, they knew what it would take to breast the tape.

Sri Lanka were in it till the last 3.1 overs of their chase. Then, the wheels came off spectacularly. They made mistakes galore, but those weren’t unforced errors. The Lankans were undone by England’s execution as much as their reputation. Someone will have to play extraordinarily well for the full 40 overs to halt this juggernaut.