T20 World Cup 2021, India vs Pakistan stats: Kohli ‘Not out’ against Pakistan, India’s domination and more 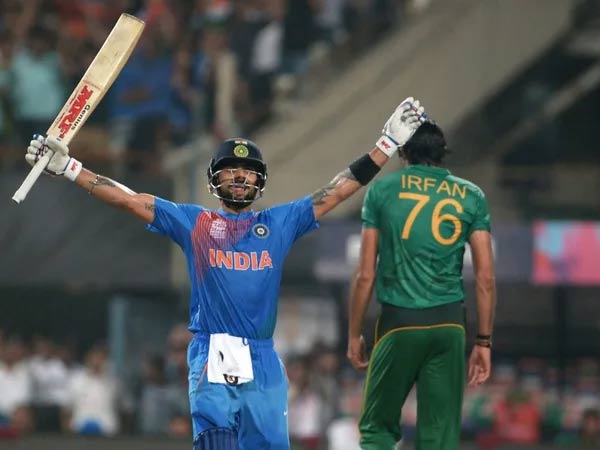 “Nothing else that I’ve ever seen throughout various elements of the game that I’ve been a part of ever matches the rivalry between India and Pakistan,” said Matthew Hayden, Pakistan’s new batting consultant.

The mother of all battles is back again. India meet Pakistan on the cricket field after two years. The last time they met each other was in the 2019 World Cup where India outclassed Pakistan by 89 runs (D/L method) in Manchester. They will meet each other in T20Is for the first time in five years. The last match they played was in the 2016 World T20 where they overpowered Pakistan by 6 wickets in Kolkata.

The two teams will lock horns in their respective opening matches in Dubai. Both teams have done well in the format since that 2016 T20 World Cup. Pakistan have had the second-best win/loss ratio of 2.3 after Afghanistan (4.833) and they are followed by India at third with 2.045.

As they get ready to battle it out in Dubai, we take a look at the key numbers from India vs Pakistan over the years in T20Is and T20 World Cups.

The 5-0 domination: India have met Pakistan five times in the T20 World Cups and India have won all the matches. One was technically a tie, that group stage game in the 2007 T20 World Cup but India won the bowl out in that game to take full points. Below are the results: Pakistan fell short by 5 runs and India lifted the title in the inaugural edition.

India’s lowest score: India’s lowest total in T20 WCs vs Pakistan is 141/9 in that tied match in Durban in 2007. Robin Uthappa’s 50 off 39 balls and late order contributions from MS Dhoni, Irfan Pathan and Ajit Agarkar lifted them to 141/9 after they were reeling at 36/4 inside 7 overs. The match ended in a tie and India won the bowl out.

Pakistan’s lowest total against India in ICC T20 WC came in the 2012 edition at Colombo when they were bowled out for 128. India gobbled the target with eight wickets and three overs to spare.

India vs Pakistan in T20Is:

Head to head: India have dominated Pakistan overall as well. They have beaten Pakistan in 6 out of 8 matches and lost just one. With one getting tied in that 2007 T20 WC.

Their only loss came in Bengaluru on that 2012 Pakistan tour to India. Pakistan restricted India to 133/9 with Umar Gul picking up three wickets and Saeed Ajmal scalping a couple. In reply, Pakistan stuttered and were 12/3 inside 3 overs before experience came to the fore as Mohammad Hafeez (61 off 44) and Shoaib Malik (57 not out off 50) helped them past the finish line in the last over.

India’s highest wicket-taker vs Pakistan: Irfan Pathan with six wickets from 3 innings at 11. He’s given away runs at 6 per over and struck every 11 balls and holds the best figures of 3/16.

From the current crop, Bhuvneshwar Kumar is the highest wicket-taker with 5 wickets from 3 innings at 15.20. He possesses an economy rate of 6.90 and SR of 13.2 with best figures of 3/9.

India’s highest total against Pakistan in T20Is came in the 2012 Pakistan tour of India where Yuvraj Singh bludgeoned 36-ball 72 in Ahmedabad to propel India to 192/5. In reply, Pakistan fell short by 11 runs.

Pakistan’s highest total against India in T20Is came in that same Ahmedabad match as they scored 181/7 on the back of 26-ball 55 from Hafeez and 32-ball 41 from Nasir Jamshed.

Their highest score batting first remains 130/7 which they scored in the 2014 WT20 in Dhaka. Ahmed Shehzad was the top run-getter with 22 off 17 balls.

Pakistan’s lowest score against India in T20Is came in the 2016 Asia Cup group stage match in Dhaka. The Indian bowlers, led by Hardik Pandya (3/8) ripped through their batting line-up and bowled them out for 83.

Pakistan battled hard but it wasn’t always going to be an uphill task. India won by 5 wickets and 27 balls to spare.

India’s lowest score batting first against Pakistan in T20Is came in the 2012 Pakistan tour of India where they managed just 133/9 as they crumbled following a 77-run opening stand between Gambhir (43) and Ajinkya Rahane (42). India fought hard and had Pakistan under the pump at 12/3, but fifties from Hafeez (61) and Malik (57 not out) dragged them past the finish line with two balls to spare.