It’s been a case of so near but yet so far the Kiwis in the past few years in ICC tournaments. They have arguably the best white-ball team in their path and it will take one helluva effort to get past them. 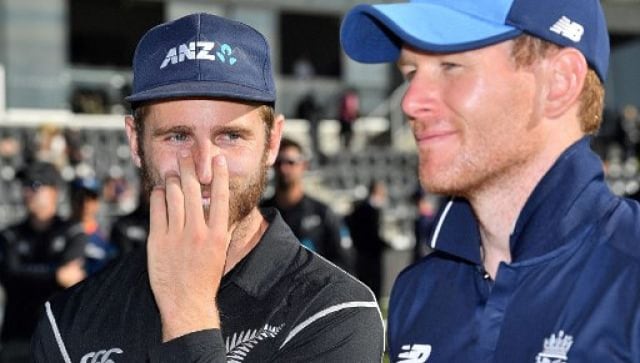 The last time England and New Zealand met in an ICC tournament, they ended up producing arguably the greatest white-ball match of all time. The hallowed Lord’s was a sea of emotions. No one lost. Only the boundary countback could separate the teams as the Lord’s theatre witnessed tension, drama, elation and tears. England lifted their maiden 50-over World Cup title. New Zealand’s wait continued.

That result hurt. It left the Kiwis numb.

Two years on, the two teams meet again. On the world stage. In a crunch match. The semi-finals of T20 World Cup. New Zealand’s hunt for a world title might have been over with the World Test Championship final win over India last year. However, a world title in white-ball cricket still eludes them.

The England vs New Zealand ties have proved to be of great significance in the last few years. Eight years ago, the hammering England received at the hands of Kiwis even before the lights were turned on in a Day/Night match in Wellington in 2015 World Cup, completely changed English cricket.

An aggressive England took shape, influenced by Brendon McCullum’s fearless army. It revolutionised England’s white ball cricket. That change in approach and mindset has brought them enormous success. And it’s that fearless and aggressive approach that has helped them get into the semis in T20 WC. They romped into the last-four stage with four wins from their first four matches, beating West Indies, Bangladesh, Australia, Sri Lanka comprehensively before suffering a blip in the last match of group stage with a narrow loss against South Africa.

There are no glaring weaknesses but they do have a few concerns – Jason Roy, Tymal Mills’ injury and Dawid Malan’s form. Roy has been an integral part of England’s white-ball set-up and was in decent form in this tournament averaging 30 with a strike rate of 138. He was in tears after suffering a calf injury in the South Africa match and has been ruled out of the tournament. It’s a huge blow for England, who’s been ravaged by injuries. They already lost Jofra Archer, Sam Curran before the tournament. And mid-way through the tournament, Mills was ruled out with a thigh strain. He had impressed with his middle and death overs bowling and brought that left-arm angle on the table. He played a match less and is the joint second-highest wicket-taker with seven wickets.

Mark Wood who replaced him against the Proteas went for 4-0-47-0. Reece Topley has replaced Mills in the squad. That death bowling concern will resurface. Against South Africa, they conceded 71/0 from the last five overs.

In the batting department, Dawid Malan has averaged 25 with a strike rate of 112. But with Roy injured, Malan might survive in the side. James Vince has been added as Roy’s replacement. A lot of permutations and combinations will come into effect with Roy’s injury. Sam Billings might replace him in the side. And England have the option of promoting Jonny Bairstow as the opener and playing Billings in the middle-order. The Roy-Bairstow opening pair played a crucial role in England’s 2019 WC-winning campaign. There is an option to open with Billings or Malan or even Livingstone as well. And there is an option to play the extra bowler in, Topley, in place of Roy which seems unlikely because Livingstone has done a good job as the sixth bowler. Morgan though said in the pre-match conference that the balance of the side will depend on the pitch and conditions and they will take a call on the match day.

England have one of the strongest bench strengths in white-ball cricket and that might hold them in good stead.

England’s aggression will meet New Zealand’s calm. The Kiwis have played some composed and calculative cricket right through the tournament so far. They have looked unflustered. We’ve seen teams panic and crumble under pressure but Williamson’s men have been resilient. After the loss against Pakistan, they regrouped and won their next four matches to qualify. Amid the Net Run Rate chaos, they cruised through to the semis without having to worry much about the decimal numbers.

Their bowling has been their biggest strength. They have a rich variety. Boult brings the left-arm angle, guile and impressive death bowling. Southee brings experience and swing. The wrist spin of Ish Sodhi has stifled the opposition along with the left-arm orthodox spin of Mitchell Santner. Adam Milne brings raw pace. They have been clever with their lengths right through the tournament and adapted according to the conditions and venues.

It will be England’s batting vs New Zealand’s bowling. The Kiwis possess the best economy rate of 6.33 in the tournament. None of their bowlers have gone over eight runs an over.

The bowlers have had tremendous support on the field. The Kiwis have been one of the best fielding sides in the tournament and the catching exhibition they put on against Afghanistan was a testament to that.

Perhaps the one area of concern is their batting. They don’t bat too deep which is uncharacteristic given the New Zealand teams of the past had a cluster of all-rounders to provide the batting depth. The batting has been too conservative but most of that has been situational. They possess a strike-rate of 118.10 and run rate of 7.60. They haven’t hit enough boundaries and average 14.6 boundaries per match. These are middling numbers. And they might be required to up these figures against a mighty England side.

Players to watch out for:

Jos Buttler: Buttler is an impact player. When in form and full flow, he can win matches single-handedly. And he’s found that form in the World Cup. He’s England’s highest run-getter in the tournament so far with 240 runs from five matches and has a brilliant strike rate of 155.84. The superb century against Sri Lanka highlighted his ability to adapt to different surfaces and conditions. His role will be more crucial now given that his opening partner Roy has been ruled out of the tournament. Williamson will have his own plans and match-ups against Buttler and it will be fascinating to see who wins that battle.

Trent Boult: Boult has taken at least two wickets in every match after the opening game against Pakistan where he claimed one wicket. He’s been impressive especially with the old ball, with clever variations and nailing those yorkers. Powerplay and death overs will be the two crucial phases against England. And Boult’s experience will be vital. He’s the joint second-highest wicket-taker with 11 wickets in the WC and given away runs at just 5.84 per over. He’s had the third-best strike-rate for bowlers to have bowled 12 or more overs – 10.7.

Head to head: The two teams have met five times in T20 World Cups, England have won three to Kiwis’ two. The last time they met was exactly this stage, the semis of 2016 World T20 and England thumped the Kiwis by seven wickets with 17 balls to spare as they chased 154 with Jason Roy smashing 44-ball 78.

Overall, in T20Is, England have the upper hand with 12 wins from 21 matches, compared to New Zealand’s seven.

There won’t be a venue advantage as such as both teams have played just one match each at the Sheikh Zayed Stadium in Abu Dhabi. And both teams won their matches by a similar margin of eight wickets.

New Zealand will take another step in search of that elusive white-ball world title and their first ICC title in 21 years. It’s been a case of so near but yet so far for them in the past few years. The heartbreaks might still be lingering, somewhere at the back of their minds. A consistently knockouts appearing side needs a final push. They have arguably the best white-ball team in their path and it will take one helluva effort to get past them.