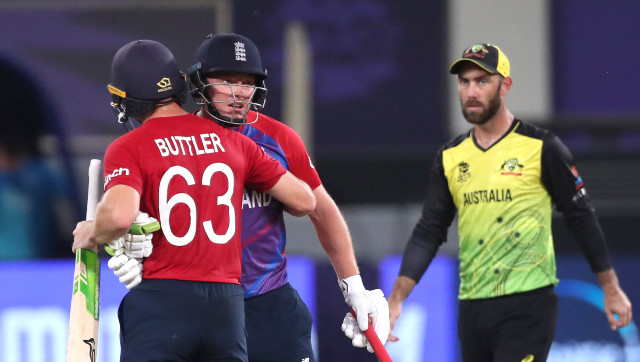 So dominant has England’s white-ball batting been in the last five years that it has completely eclipsed other admirable facets of their cricket – excellent all-round bowling backed up by electric fielding, and impeccable preparation that has enabled them to cover all bases.

Not even the most pulverisinginnings of the T20 World Cup to date, by the effervescent Jos Buttler, could deflect attention from a command bowling display at the Dubai International Stadium on Saturday night. This was billed as a contest of the equals, but like the other battle between traditional rivals earlier in the competition when Pakistan lorded over India, it was singularly one-way traffic. England comprehensively schooled Australia, subjecting them to the kind of shellacking the multiple-times world champions have seldom been at the receiving end of.

At the heart of their ridiculously easy victory, by eight wickets with a whopping 50 deliveries to spare, was the incisiveness of their bowling attack, headlined by the two Chrises – Woakes and Jordan. On a surface that had the most live grass of the competition, the two right-arm quicks turned in a high-quality exhibition of seam bowling, ripping the heart out of the Australian top order.

In some ways, it was heartening to see Test-match bowling wend its way into T20 cricket. It didn’t take long for Woakes and Jordan to suss up that while swing may not be on offer, there was lateral movement to be exploited. In a tournament dominated by changes of pace and spin, the two quicks feasted on unusual assistance, however minimal and brief it might have been, to run rings around Australia’s flat-footed top. The two right-arm quicks turned in a high-quality exhibition of seam bowling, ripping the heart out of the Australian top order. AFP

Woakes and Jordan are experienced heads, the former an all-format international and the latter a limited-overs expert. Jordan was a shoo-in for the World Cup, but Woakes might have been superfluous to English plans had both, or perhaps even one, of Jofra Archer and Ben Stokes been available. As recently as in February-March, when England toured India, Woakes was conspicuous by his absence for the five T20Is and the three ODIs. Thrown an unexpected lifeline, he has grabbed his opportunity with both hands, presenting the parsimony and the penetration up top that has enabled his side to restrict first West Indies, and then Bangladesh and Australia to extremely manageable totals.

Not even a late assault by Ashton Agar, who smashed him for consecutive sixes in the 17th over, severely dented Woakes’ figures. His two for 23 came on the back of identical figures of one for 12 each against West Indies and Bangladesh, one of the main reasons for England picking up ten wickets in three Powerplay bowling efforts thus far. These early strikes have forced opponents to focus on rescue and recovery rather than batter and bruise, a key factor in England running riot in the more formidable Group 1 of the Super 12s where they boast a commanding 3-0 record.

On Saturday, Woakes triggered memories of David Warner’s nightmarish run against Stuart Broad in the Ashes two years back by angling the ball across the advancing left-hander and compelling him to nick behind the stumps. He then showed that he is no one-trick pony by pushing Glenn Maxwell back with a fuller delivery and pinging him palpably in front. Done for now, thank you very much, he seemed to tell Eoin Morgan once Australia limped to 21 for three at the end of the first six overs.

This wasn’t by any stretch of the imagination the Woakes show alone. Jordan cleaned up Steve Smith in the Powerplay, courtesy an outstanding catch by – who else? – Woakes, then returned at the death to winkle out the beleaguered Aaron Finch and Pat Cummins off consecutive deliveries. In the middle stages, spinners Adil Rashid and Liam Livingstone combined for figures of two for 34 from eight overs. Tymal Mills took some tap, but that can happen from time to time in the rough and tumble of this format. After all, if anyone had told the English at the start of the game that Australia would be shot out for 125, they would have more than gladly taken it.

Most remarkably, Morgan didn’t even feel the need to turn to Moeen Ali, his best bowler of the first two games. The off-spinner had operated exclusively at the top end – six of his seven overs in the two previous games came in the Powerplay – but with just one left-hander in the Aussie top-five and Finch’s penchant for bowlers of his ilk hardly a secret, Morgan put commonsense ahead of bravado. He could afford to. As infrequently as leggie Rashid bowls in the first six, he isn’t uncomfortable with a brand new ball. Also, there is so much depth in the bowling that Morgan could afford to use his two marauding quicks for five overs with the field restrictions on, looking for the wickets that could stymie Australian designs of a late charge.

England’s bowling is varied, versatile, adaptable and aggressive. There is left-arm and right-arm pace; each of the faster bowlers has a plethora of slower-ball choices. Spin is pretty well covered through Rashid and Moeen, with Livingstone providing a unique new dimension – he is as comfortable bowling wrist spin to the right-handers as he is finger spin to the lefties. If England’s bowling attack is only second best to Pakistan in the variety stakes, it’s perhaps because they don’t possess a left-arm spinner, but hey, you can’t have everything, can you?

The bowlers must have been delighted that for once, they are in the limelight. Often, the focus is on the brutalising capacity of their unforgiving, unending batting line-up for whom no total is beyond reach. On this night, though, they were the undisputed stars despite Buttler’s exhilarating unbeaten 71, off a mere 32 deliveries with five fours and as many towering sixes. There hasn’t been a more convincing knock all tournament but truth to tell, Buttler was under no pressure. Why would he be, when his bowling group is firing on all cylinders?