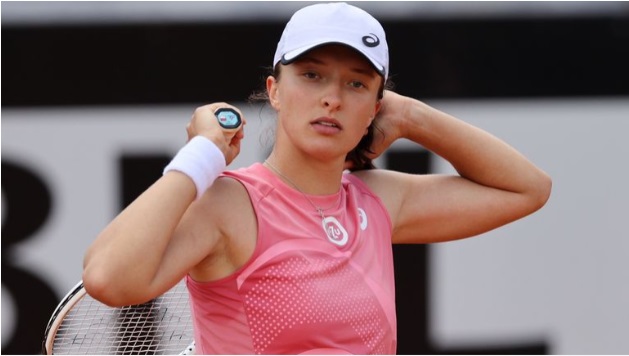 Iga Swiatek made short work of her more experienced opponent with a 6-2 7-5 win to set up a semi-final clash with Coco Gauff. French Open champion Iga Swiatek won her Italian Open quarter-final and semi-final matches in straight sets on Saturday to set up a title clash with ninth seed Karolina Pliskova. Former world number one Pliskova, who won the 2019 edition and finished runner-up to Simona Halep last year after retiring in the final with an injury, reached the final for the third straight year after beating Petra Martic 6-1 3-6 6-2.

Swiatek’s quarter-final match against two-times champion Elina Svitolina was postponed due to rain on Friday but the 19-year-old made short work of her more experienced opponent with a 6-2 7-5 win to set up a semi-final clash with Coco Gauff. Swiatek then moved into her first WTA 1000 final with a 7-6(3) 6-3 victory over the American 17-year-old.

Gauff fired seven aces but also served five double faults and she struggled on her second serve as Swiatek converted three of four break points to advance. Swiatek, ranked 15th in the world, will be playing for a spot in the top 10 when she faces Pliskova on Sunday. Pliskova broke Martic in the first game before racing away with the opening set but allowed Martic back into the contest in the second after making a number of unforced

The match was evenly poised at 2-2 in the final set before Pliskova took control, capitalising on Martic’s errors to break twice before sealing the match on her second match point when the Croatian’s return went long.