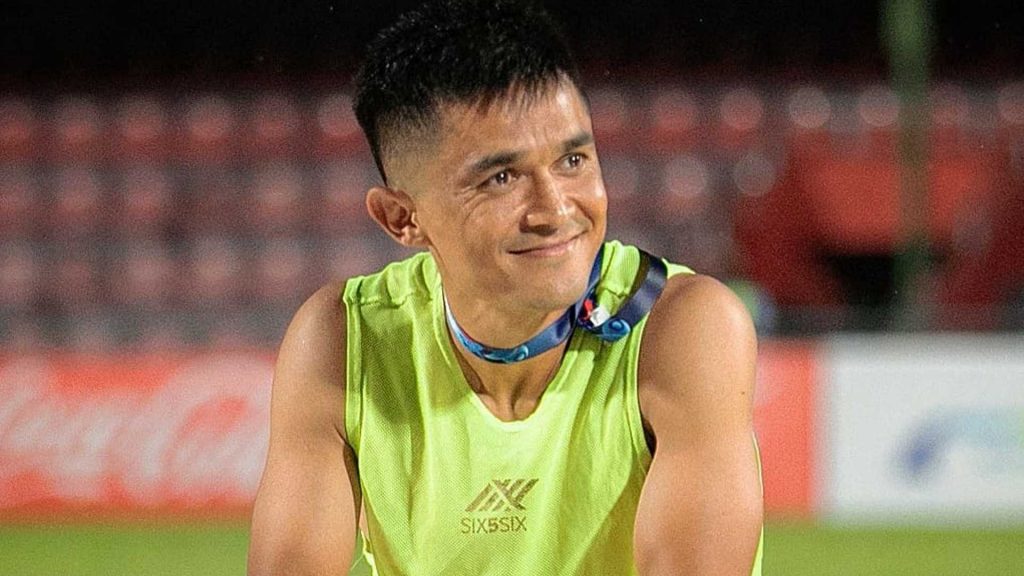 Talismanic skipper Sunil Chhetri played a pivotal role in India’s eighth SAFF Championship title triumph by striking five goals but he credited the young brigade for team’s victory. The 37-year-old Chhetri, Indian football’s torch bearer for the last 10 years, went past legendary Pele and equalled Lionel Messi when he scored the team’s opener — and his 80th goal — against Nepal in the summit clash on Saturday. “Look at the youngsters — it feels good for all of them. It’s all due to their hard work. We were here for 20 days till the final, staying on an island, riding the waves every day for practice sessions, and matches,” Chhetri said in a release from All India Football Federation.

“We made it special as we were not so good in the first two games. It was tough from there to come up and play the way we did,” added Chhetri after his third triumph in the SAFF Championship as a player. Chhetri, who has won the regional tournament in 2011 and 2015 also, was referring to the draws against Bangladesh (1-1) and Sri Lanka (0-0) in the first two matches which had attracted criticism.

“Didn’t start like we should have, but ended exactly how we wanted to. Proud of this bunch and the way we got things on track,” he later said in a tweet.

Chhetri, who scored five out of India’s eight goals, was all praise of the other two Indian goal getters on Saturday — Suresh Singh and Sahal Abdul Samad.

“I enjoyed watching that, Sahal. Suresh, of all the things you copy from me, this is up there. Make it a habit,” said the captain.

Sahal, on his part, said it was an “unbelievable” moment and “a miracle”.

“I don’t know what happened inside the box. I came in for the last 4-5 minutes. My teammates have been working hard – it all goes to them,” he said.

“But I just don’t remember what happened inside the box. I got it and went in. This is an amazing feeling.”

Head coach Igor Stimac, who was banned from the dugout in the summit clash after being red carded in the earlier league match against Maldives, let the players take centrestage.

“The boys have done it,” he quipped.

Stimac became the third foreign coach after Jiri Pesek (1993) and Stephen Constantine (2015) to clinch the title with the Indian team.

The Blue Tigers dedicated the trophy to their two injured teammates — Farukh Choudhary, and Brandon Fernandes, who weren’t able to travel to the ground. While Mandar Rao Dessai and Glan Martins carried Brandon’s jersey with them, Rahul Bheke preferred to wear Farukh’s jersey even at the victory podium.

“Farukh and Brandon are very much here, and a part of this triumph. Their contribution in this Championship will never go unnoticed,” Bheke said.

“I wore Farukh’s jersey as I wanted him to be with us during the trophy celebrations.”

With the title win, India extended their domination in the regional tournament. Saturday’s final was the 12th for India in 13 editions. The players leave for Bengaluru Sunday night from where they will join their respective clubs for the Indian Super League.

However, the U-23 players, including goalkeeper Moirangthem Dheeraj Singh, will stay back in Bengaluru for a couple of days before flying to Dubai for the AFC U-23 Qualifiers on October 20.