Sri Lanka’s top-order batting held firm to ensure a draw and a drawn series against the West Indies on the last day of the second and final Test. 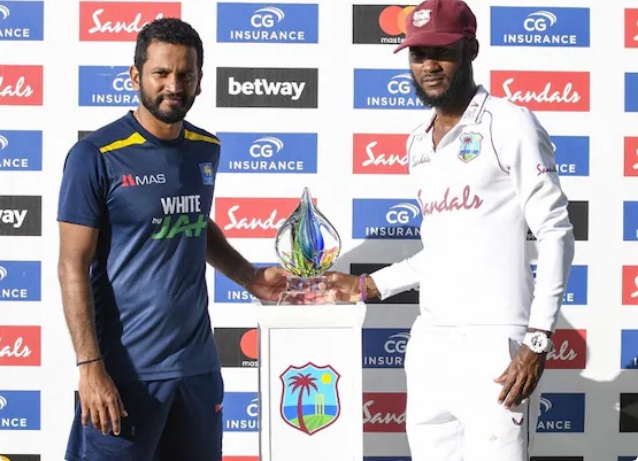 Sri Lanka’s top-order batting held firm to ensure a draw and a drawn series against the West Indies on the last day of the second and final Test at the Sir Vivian Richards Stadium in Antigua on Friday. Set the daunting target of 377 and resuming at 29 without loss, the tourists reached 193 for two with a tops core of 75 by captain Dimuth Karunaratne and an unbeaten 66 by Oshada Fernando leading the resistance. After managing just 16 runs in three previous innings, Karunaratne’s 25th Test half-century spanned over four hours.

He faced 176 deliveries and struck nine fours before being trapped lbw by seam bowling all-rounder Kyle Mayers just before the end of the post-lunch period.

“I am really happy the way we played in this series, especially the bowlers and particularly Suranga (Lakmal),” said Karunaratne in paying tribute to the man of the series for his 11 wickets in the two matches.

“We need to improve on our batting though, especially in building partnerships. That’s a concern for me going forward.”

Karunaratne put on 101 for the first wicket with Lahiru Thirimanne who battled through to the afternoon period before he eventually fell for 39, edging a full delivery from fast bowler Alzarri Joseph for Rahkeem Cornwall at first slip.

Thirimanne ended the series with a tally of 240 runs, the most on either side and putting him three runs ahead of the leading West Indian, captain, and fellow opening batsman Kraigg Brathwaite.

“None of our players ever gave up. Everyone tried really, really hard all the way through,” said Brathwaite reflecting on 10 days of Test cricket and especially the final day of the series when they struggled for any potency on a placid surface.

“We are heading in the right direction and once we keep that discipline and commitment we will be a team to reckon with.”

Brathwaite’s innings of 126 and 85 made him the obvious choice as man of the match.

While the home skipper exhausted every bowling option available to him, Fernando ensured there was to be no late stumble in the final session in partnership with former captain Dinesh Chandimal.

As well as he played though, in nearly three hours at the crease, Fernando again seemed vulnerable to the gentle swing bowling of Mayers.

Dismissed in his previous two innings by the Barbadian, he needed the benefit of television replay technology and a successful DRS referral to have a leg-before verdict against him off Mayers overturned.

Sri Lanka’s task was made easier by the absence of Shannon Gabriel for most of the afternoon.

West Indies’ fastest bowler left the field in his sixth over with what appeared to be a hamstring injury.

That injury would have only worsened Gabriel’s mood after he saw wicketkeeper Joshua da Silva spill a leg-side catch offered by Thirimanne at the start of the day when the opener was just on 17.

Early-morning rain delayed the start of play by just over an hour, effectively ending any distant hope the Sri Lankans would have entertained of launching a run-chase