Spanish newspaper El Mundo leaked the details of Barcelona star Messi’s contract, from contract amount, to salary per year and even the renewal fees 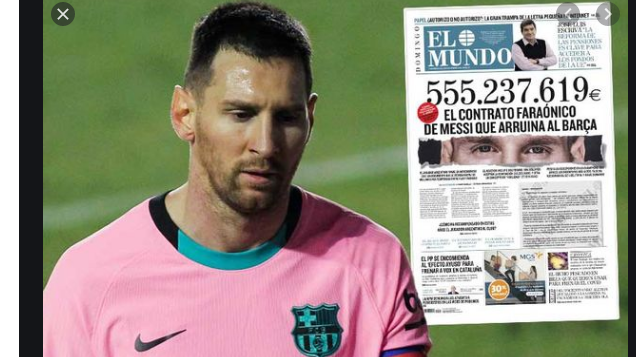 El Mundo published the information under a headline which said Messi’s contract will ‘ruin Barcelona’, with the Argentine understood to be the highest paid athlete ever.

It was El Mundo who claimed the club are ‘on the verge of bankruptcy’, with much of the blame being laid at the door of the former board led by Josep Maria Bartomeu.

And Barca on Sunday denied leaking details of Mess’s contract to the newspaper, with a statement confirming the club will also take legal action against the publication.

The statement read: “FC Barcelona categorically denies any responsibility for the publication of this document, and will take appropriate legal action against the newspaper El Mundo, for any damage that may be caused as a result of this publication.”

According to the report by the newspaper, Messi will receive €555,237,619 (INR 4920 crores, approx.) over the four seasons for Barcelona, if all the conditions in the contract are met by the player. The newspaper claimed that Messi has already earned €511,540,545 even though the contract still has five months in its expiry in the month of June.

The El Mundo report that released on Saturday night suggested that Barcelona agreed to pay Messi €138,000,000 per season, including variables.

Frank Lampard was sacked by Chelsea on Monday after 18 months as head coach (Lampard’s dream job was ended )
Several Arrested During Raid at FC Barcelona (The number of arrests made and the identity of those involved have not yet been confirmed.)