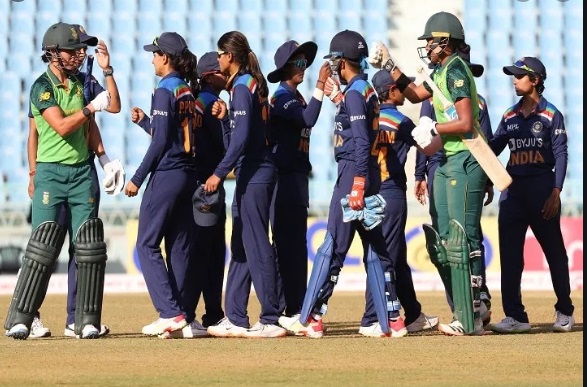 Toss update: The South African women’s team won the toss and elected to bowl against hosts India in the fourth ODI on Sunday.

India Women vs South Africa Women 4th ODI: A brilliant batting effort by South Africa Women helped them tumble India in the fourth encounter of the ongoing five-match ODI series in Lucknow on Sunday. The Laura Wolvaardt-led South African unit wrapped up the stiff 267-run chase with eight balls to spare and won the contest by seven wickets.

With this win, the visitors have now taken an unassailable 3-1 lead in the five-match series and the final clash will be played on Wednesday. This was also South Africa’s highest successful run-chase in ODIs.

The South African women’s team’s top-order batters fired in unison and helped their team clinch the five-match series against India with a seven-wicket victory in the fourth ODI on Sunday. Chasing 267, Lizelle Lee (69), Laura Wolvaardt (53), Mignon du Preez (61) and Lara Goodall (59 not out) shone as the visitors completed the task in 48.4 overs for an unassailable 3-1 lead in the rubber. A poor squad selection by new committee under Neetu David cost India dearly as the hosts paid the price for ignoring Shafali Verma’s flair in batting and Shikha Pandey’s experience in bowling. In response to India’s 266, the opening pair of Lizelle Lee and South Africa skipper Wolvaardt provided the visitors with a brilliant start as the duo combined to add 116 for the opening wicket. Lee was the first batswoman to depart after she was trapped LBW by Harmanpreet on 69 off 74 balls in the 23rd over.

Soon after her dismissal, seamer Mansi Joshi provided the hosts with another breakthrough in the form of Wolvaardt, who departed after scoring a fine half-century.

Following that, India failed to inflict further blows on the opposition as the new pair of Lara Goodall and Mignon du Preez stitched 103 runs for the third wicket. Rajeshwari Gayakwad picked the third wicket for India, dismissing Du Preez on 61.

Godall along with Marizanne Kapp then wrapped up the contest with the former remaining unbeaten on 59 from 66 balls, while Kapp fetched 22 from 18 balls.