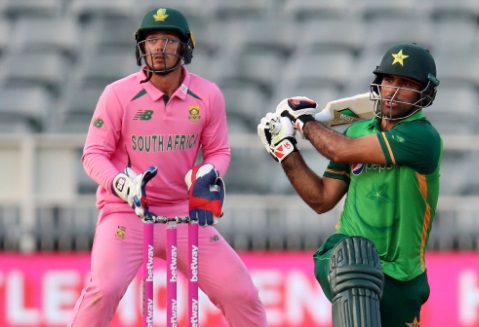 SA beat PAK: Fakhar Zaman’s 193 in vain as all-round show helps South Africa beat Pakistan by 17 runs and level ODI series 1-1 – It was South Africa’s match to lose after four fifties from Quinton de Kock, Temba Bavuma, Rassie van der Dussen, and David Miller helped them set a mammoth 342-run target for Babar Azam’s Pakistan in the 2nd ODI at the Wanderers Stadium in Johannesburg on Sunday. But Fakhar Zaman with his 193 had almost clinched the series for Pakistan but they fell short by 17 runs.

Aiden Markram and Quinton de Kock gave South Africa a good start. But in the 10th over, Markram, looking good with the bat, departed off a Faheem Ashraf delivery, failing to convert his good start.

After Markram’s wicket, de Kock and Bavuma anchored South Africa innings. Quinton de Kock also completed his 500 runs against Pakistan in the process. The duo put up a 114-run partnership for the second wicket to give South Africa a strong platform.

But Quinton de Kock could not convert his fine knock to a century as he was scalped by Haris Rauf in the 31st over on 80. But the Proteas did not slow down as Rassie van der Dussen followed up his century with a quickfire 60 off 37 balls to put South Africa in command.

Bavuma too continued his fine run but failed to reach the three-figures after being dismissed on 92. There was a late cameo from David Miller, who hit 50 off 27 to help South Africa post 341/6 in 50 overs. For Pakistan, Haris Rauf was the most successful bowler with three scalps for 54 runs in his 10 overs.

Pakistan was dealt an early blow in the chase when Imam-ul-Haq was dismissed by Lungi Ngidi in the 2nd over. While Babar Azam and Fakhar Zaman steadied the innings. Three quick wickets from Anrich Nortje floored Pakistan in the tough chase.

But at the other end, Fakhar Zaman, who was struggling with form, kept Pakistan’s hopes alive with a brilliant knock of 193. The opener hit 18 fours and 10 sixes as he looked set to score his second double hundred but with his wicket, Pakistan fell short by 17 runs. South Africa leveled the series 1-1 and as their stars depart for IPL, they will be hoping for a miracle to win the home series against Pakistan.

SA vs PAK 2nd ODI LIVE Team news: As for Playing XI, Pakistan and South Africa both will field an unchanged XI.

As many as five first-team stars and frontline pacers including Kagiso Rabada, Lungi Ngidi and Anrich Nortje will leave after the 2nd ODI. Meaning, it will be their last opportunity to see South Africa do well in the ongoing series against Pakistan.